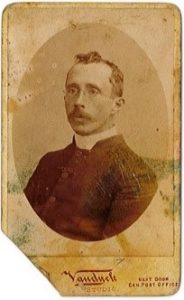 It is terrible to think of a human dying from exposure and starvation but it is almost more distressing when human misadventure causes  the death of an innocent animal. This terrible scenario and subsequent death and mystery occurred in 1892 when John Sackfield disappeared in the Victorian High Country.

The name John Sackfield is very uncommon yet I have had some difficulty tracking his movements prior to arriving in Gippsland. The only probable lead I have found lists a Reverend Sackfield on a ship’s manifest as travelling from Melbourne to Sydney in 1861. For some odd reason, when our John Sackfield arrived in Gippsland he was not using the title of Reverend and was referred to simply as Mr.

In 1887 the Anglican Bishop of Melbourne appointed John Sackfield as the lay reader for the Callignee and Tragalgon South district. It was his responsibility to provide religious services in the area and although he was given greater powers than the usual lay reader he was still unable to perform certain ceremonies such as the Eucharist. John was not a young man, yet during this time he was also trying to select land but was constantly unsuccessful. Keeping in mind that most land applications were granted it seems that poor old John might have missed out or been punished for some unknown reason. 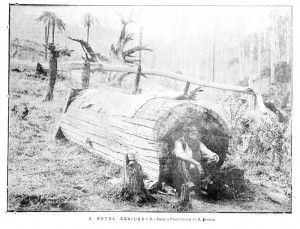 A Hollow Log Similar to one that John Sackfield Lived In. Photo Courtesy of The State Library of Victoria

Despite being well read and educated Mr. Sackfield found the going tough. In the winter of 1887 he became disorientated and was lost for several hours in the area south of Callignee. Obviously the position of lay reader was either voluntary or provided him with a very small income and John’s life was not an easy one. There was no manse or parsonage for Mr. Sackfield. Instead he found alternative accommodation in the form of a large hollow log about halfway along the track between Callignee and Traralgon South. He lived like this for 3 years until 1890 when he was offered the position of lay reader in the Geelong area under the leadership of Cannon Goodman. Within months this position terminated and Mr. Sackfield was on the road again, this time as the reader in the remote Bendoc area. 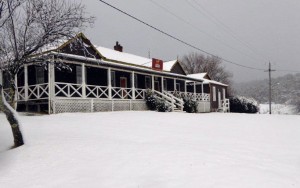 Bendoc is a small settlement high in the Snowy Mountains 110 klms north of Orbost. From 1855 to 1879 the area was a bustling gold mining district but when the gold ran out the miners moved on. By 1891 there were only a handful of diehard locals searching for gold or farming cattle and John Sackfield joined their midst. But John was determined to select land and become a station owner. For some foolish reason, during the winter of 1892 he resigned his position and took off on horseback on a quest to find suitable land. Two weeks later it was realised that he was missing and a search party set out. The freezing temperatures, the snowfall and impenetrable bush made the search party give up after only a few days. As the months wore on it became evident that he had perished somewhere in the high country between Bendoc and the small settlement of Combienbar.

In October of 1893, a local farmer and J.P. by the name of Hensleigh found the skeletal remains of John Sackfield’s horse still tied to a tree in an area known as Cobyingbah. The skeleton was wearing the bridle, saddle, breastplate and saddlebags. Another search was carried out but no sign of John Sackfield was found. About a year later a local farmer became lost in the same area. Exhausted and delirious he claimed to have stumbled upon a skeleton which he believed to be our Mr. Sackfield. After his rescue he led another search party into the area but he was unable to retrace his steps. As far as I know, John Sackfield’s bleached bones are still lying deep in the bush somewhere in the Victorian high country. 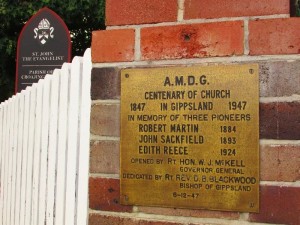 In 1947, on the 100 year anniversary of the Anglican Church in Gippsland, a memorial was installed to commemorate the pioneer evangelists including Mr. John Sackfield. A brass plaque was put on the brick pillers of a lych gate at St. John’s Angilican Church in Cann River. If you are in the area, pop in and spend a moment to think of our poor Mr. Sackfield and the incredibly difficult lives that our pioneers endured.

Relevant The Skeleton of His Horse Links