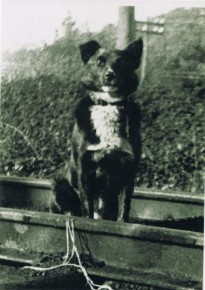 Jerry the Railway Dog. Photo courtesy of The Cockatoo History and Heritage Group and The Pakenham Gazette

If you have travelled on Puffing Billy in the last few years, you would have seen a grave marker near Cockatoo for a very special little pooch named Jerry. In the 1930’s, this little black and white dog took it upon himself to be the mascot of the Gembrook train line. A little stray who was unloved and unwanted he took his destiny in his own paws and taught the train travellers of the hills to love him. Eighty years on and the people of the Gembrook area still talk about this special little dog.

From The Argus (Melbourne, Vic) Saturday 19 August, 1950.  “Jerry was a dog who spent his life on the railway track between Upper Ferntree Gully and Gembrook, following the little mountain train its entire distance three or four times each week.

He was a small black and white dog of doubtful origin and no home ties, radiating the joy of living.  The trip was 18 miles of wandering 2 ft 6 in track. Although he often rode on the engine, for a good part of the trip he ran behind, cunningly taking short cuts through the bush when the train got ahead of him.

At Gembrook he would often go to sleep before the evening trip back. He possibly did a bit of rabbiting on the side. Then, full of enthusiasm, he would be ready for the return journey.

Perhaps fame turned his head, for becoming too venturesome, he was one day run over by the engine and killed. He was buried near Cockatoo Creek beside the line he had raced over so long and joyously.” 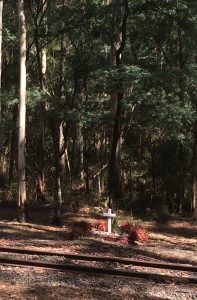 The Grave of Jerry the Railway Dog, March 2019. Photo by Annie O’Riley

Another mention of Jerry was in the Launceston Examiner on Wed 9 May 1934. Jerry was said to be a stray that was adopted by Dick Down, the engine driver. Dick (who’s real name was Lionel) was 54 years old and lived with his wife in Ferntree Gully. The couple were childless and a little dog like Jerry would have found a big place in their hearts. After Jerry’s death a white cross was placed on his grave alongside the railway line. The marker was burnt in the Ash Wednesday bushfires of 1983. In 2007 the grave was identified and a secure marker was put in place. Dick and his wife continued to live in Ferntree Gully until their deaths. Beatrice passed away in 1942 and Dick followed in 1947. Both are buried in the Box Hill cemetery although I am sure they would have liked to have been closer to Jerry, a very special little railway dog.