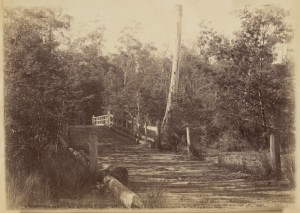 This little story has kept me confused for a quite a good while. In all the newspaper reports, the district in which this happened was called Cockatoo Creek. All of my reading and investigations had me believing that this was an early name for the township of Cockatoo, but no matter how I looked at it I could not match the names of the residents with maps of Cockatoo during the 1880’s. So I started following the Cockatoo Creek both north and south looking for familiar names on the parish maps. What I found was that the settlement of Yellingbo seems to be the area in which this story is set. The name Yellingbo was used intermittently from the 1890’s on and honors a local indigenous warrior but the area was also referred to as Parslows after an early shop owner and at some time it was also referred to as Claxtons after the first hotelier. To add to my confusion it seems that a postmaster for Beenak was named Claxton and at certain times Beenak was also referred to as Claxtons. To ease the confusion I am referring to the area simply as Yellingbo.

On a cold May morning in 1885, young Clara Harriet Crosby set off on a two kilometre walk to visit her mother in Yellingbo. Both Clara and her mother had only recently moved to the district. Her mother was living with a man by the name of Robert Leech and she arranged for Clara to board with a with a local family by the name of Haines. The Haines property was just south of Parslows road and in between the Macclesfield-Worri Yallock road and the Healesville- Koo Wee Rup Road.  Mr. Leech’s home was about two kilometres north on the other side of Yellingbo. Clara was unfamiliar with the area and on the morning of the 12th of May, Clara set out, promising the Haines family that she would be back by nightfall. It wasn’t until two days later when Leech came to inquire about Clara, that it was discovered that she had never reached her mother. The police were called and searches started by local residents and black trackers brought in. The heavy rains had washed away her tracks but the neighbors were interviewed and the local hotelier by the name of Claxton stated that he had seen her pass his place on the morning that she disappeared. This would mean that she had walked north-east along the Macclesfield- Worri Yallock road. This information was also collaborated by Mrs. Haines, who believed that she had set off in that direction. All searches were thereby conducted to the north and when she was not found it was felt that she might have made her way to the train station in Woori Yallock and gone back to Melbourne to stay with friends in the Salvation Army. As time wore on it became apparent that she was not in Melbourne and, due to the extreme cold, it was felt that she had perished somewhere in the thick bush around Yelingbo.

Three weeks later two men were searching for lost horses when they heard a faint cooee. The sound was coming from an almost impenetrable area of the Cockatoo Creek where the creek makes a horseshoe bend and the opening of the bend was covered in difficult swampy land. The men traced the sounds and eventually found little Clara, naked, cold and starving. She described her ordeal whereby she travelled south from the Haines property, eventually coming to a house where she knocked on the door. No one was home so she turned and made her way back in what she thought was the direction she had come from. Eventually she became tired and lay down and slept. When she awoke it was getting dark but she continued on until she found herself at the tangled undergrowth of the Cockatoo Creek.  Again she lay down and slept until the morning when she attempted to cross the creek on a sapling. The sapling broke and she fell into the swollen creek. She was unable to swim but managed to drag herself to the opposite edge. She was cold, miserable and hungry but she found a hollow tree where she stripped off her wet clothing and made a bed for herself and hung her petticoat as a door to keep out the freezing wind.  As each day passed she dragged herself to the creek to drink water but was too afraid to try to cross the creek again. She tried to eat gum leaves but decided that they were poisonous so ate nothing at all during the three weeks in which she was lost. Towards the end of her ordeal she was too weak to reach the creek so she lay in her hollow tree until the men heard her call.

Poor little Clara’s story doesn’t end here. Five weeks later an article in the Launceston Examiner states that the owner of the Melbourne Waxworks museum offered £3 per week to Clara’s mother to put her on exihibition. The offer was not accepted but on September 4th it was reported that her father had leased her to Mr. Kreitmayer from the waxworks. Twice each day she would go on stage and graphically recall the scripted story of her ordeal. On the 11th of January in 1886 it was reported that more than 150,000 people had visited the show and Mr. Kreitmayer took her on tour to Sydney. In the advertisements, Clara is claimed to be 12 years old, but in my research I found a marriage license showing that Clara was married one year later to a man named John Leishman.  Tracing back trying to find proof of Clara’s age it seems that all newspaper reports stated that she was eleven years old when lost, yet her birth certificate shows that she was actually fifteen. This would make her seventeen when she married.

But yet again this is not the end of poor Clara’s story. In the late 1890’s Clara and her husband had separated but in 1902-1903, they had a temporary reconciliation when their eldest child died at the age of 15.  In August of 1903 the newspapers reported that a brutal assault was made on Clara Leishman by her husband John. In a violent argument he dragged her through the house then pulled out a gun and attempted to shoot her twice. A policeman was nearby and heard the shots. He broke down the door and arrested John Leishman. The case went to court and despite the strong evidence to the contrary the jury produced a verdict of not guilty.  This verdict might be explained by the fact that a few months later Clara gave birth to her fifth child.

Clara was lost within 5 kilometres of the Yellingbo settlement, yet her cries were not heard. It is difficult to imagine being so cold, hungry and alone in the frightening world of the bush, yet Clara never gave up. As the years wore on she maintained her dignity and in 1945 at the age of 75 she passed away quietly in Glen Iris.