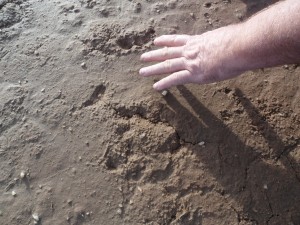 While in Western Australia recently, my husband and I camped in a remote area near a dry lake. During the night we had a torrential rain storm and in the morning it was as though the world had been swept clean. As we walked out towards the middle of the lake we spotted the deep tracks of a wild camel. Looking closer we also saw the prints of an extremely large dog who appeared to be in pursuit. The tracks would have  been made during the storm so they were slightly washed away but they were clear enough to get a measurement of 20 cm (8 inches) from toe to heel.  The photo above shows my husband’s hand next to the print. We cautiously mentioned it around and we were shocked when a man from one of the mining camps stated he had seen many of these large dogs near Norseman in WA. This got me rethinking the chances of mysterious animals living and breeding in Gippsland.

A number of years ago I was hosting a dinner party when one of my guests mentioned that he had seen a strange animal nearby. The group went silent until another guest mentioned that he too had seen what he thought was a giant cat just up the road. These two men (to my knowledge) have never mentioned the subject again.  There is a sort of stigma attached to making a statement such as that.  We have all read the sensational stories; a panther sighted deep in the bush, giant footprints discovered near the carcass of a full grown cow, or an animal similar to a tiger or panther glimpsed on the side of the road. In the early 1900’s these stories seemed to be at a fever pitch and most of them centered around Central and West Gippsland.

Recently I found an article (Traralgon Record, Circus, 1903) in which a writer, under the pen name of “Lightwood” talks about how his family, living in Yarram, obtained an elephant from a circus in financial difficulties. The elephant was engaged in dragging a sledge with water barrels from the creek to the homestead. After he broke into the house and ate all the bread and destroyed the kitchen, the family was relieved when he broke loose and disappeared. His skeleton was found about a year later, miles away in swamp land. The poor beast had become bogged in the swamp and was unable to extricate itself.  But my point is this; if the circus sold an elephant then what other animals were also sold, dumped or escaped?  I have found a number of circuses who’s stock was auctioned off in Victoria in the early 1900’s including one which was unable to sell a performing lion and tiger. If animals like these were dumped in the bush and keeping in mind that there are no native animals that form a threat to large cats, it is quite possible that they survived and thrived in the wild. The average life expectancy of a panther is 16 years while a lion or tiger can be expected to live 20 years. This means that theoretically they could have survived but would have to have been released as a breeding pair for the animals to still be around today.

In October of 1915, The Traralgon Record reported that a Mr. Horace Brinsmead saw an animal that he claimed was a lioness in the Haunted Hills near Morwell. He stated that he was about 50 yards away and that was certain that it was a large cat and that he knew the difference between what he saw and a large dog or fox. The article also mentions the rumours that a circus travelling in the area years earlier had lost a lion. Mr Brinsmead was not the only local to report seeing a lioness. A few years earlier a Master Fleming also saw an unusual beast in the Haunted HilIs. And then in 1916 a Mr. Curtis reported seeing a large dog similar to a deerhound which he believed was the Haunted Hills lion.

In 1933, the Briagalong Inspector for the Fisheries and Game Department reported that footprints, six inches long and 4 inches wide (150 mm x 100 mm) had been seen. The animal was claimed to have a tawny colored head and shoulders and had been seen jumping a 9 foot (2.75 metres) gully. In October the Gippsland Times reported that a Mr. Siggins, a farmer near Gunyah, saw a large beast similar to a lioness, in the bush near his property. He stated that it appeared to be about six feet long (1.8 metres) and had a large cat like head. The sound it made was a snarling cry similar to a cat but deeper.

The same article lists other sightings of the “Gippsland Monster”. Near Guyah a similar animal was seen by the Rev. Mr. Crocker. At Tanjil the Rev. W.G. Fitzgerald was amongst a group of miners who saw a strange animal. Another article in November of 1933 reports that two men working at clearing bracken on Mt. Best, saw a large animal who stood about 3 foot high (about one metre) with a head like a cat. The locals were anxious and search parties of men with rifles were scouring the bush looking for this “monster”.

On the 3rd of February in 1934 an article appeared in The Mercury (Hobart) apparently clearing up the mystery. “After many weeks the mystery animal of Gippsland has been run to earth. His tracks have been diversely described as those of a tiger, a super dingo and a panther. A few weeks ago the inhabitants of one township thought they had him. Seeing unusual tracks on the banks of a flooded creek, they turned out to a man with every kind of weapon available. After some excellent tracking they ran down the fearsome beast, which proved to be the local postman who had been forced to abandon his boots in the adhesive mud brought down by floodwaters. ‘Posty’ was annoyed, and said so. It has remained for a constable of the wireless patrol, who was on a shooting expedition in the hills near Drouin yesterday, to clear up the 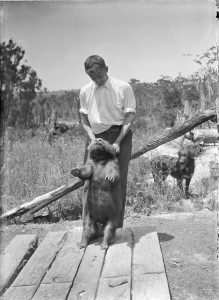 A wombat captured in Victoria. The “giant” wombat would have been nearly double the size.

mystery. After some trouble and a fight in which one of his dogs was severly clawed, he has brought to Melbourne Zoological Gardens to-day something very special in the way of wombats. Apart from his phenomenal size, this wombat has feet formed like no other wombat that the curator of the zoo has yet seen, the impression being about as large as a man’s hand. According to the latest reports, he is industriously trying to eat his way through the iron fence of his enclosure.”

The Argus (Melbourne) for the same day ran a photo of this giant wombat which was described as being very large with a golden pelt. The feet were unusually large and it’s odd gait left tracks that were described as being unlike any other wombat. The curator of the zoo, Mr.Wilkie, said that the wombat had been savagely mauled by the two Alsatian dogs used to capture it and it would have been cruel to release it back into the bush in it’s condition. On February 20th 1933, just 17 days after it’s capture the giant wombat died. It’s pelt and skeleton were sent to the Australian Institute of Anatomy in Canberra.

Of course a giant wombat cannot jump a six foot gully or stand three and a half feet high. He is not usually associated with mass killings of sheep or full grown bullocks and nor does it have a head like a cat. And so the reports of strange animals continued. On the 7th of March 1934 a strange animal was seen near Boolarra. It had a large brown head with a long bushy tail. In June of that year a “tiger” was reportedly seen on the Gormandale road between Traralgon and Yarram. And then on 23rd of July it was reported that a Mr. Robert McDonough had shot and killed a large animal near the old Walhalla road about 3 miles north-east of Moe.  Mr. McDonough tracked it while it was chasing two foxes. When approached it turned and showed no fear, rather it snarled, bared it’s teeth and the hair on it’s neck bristled. It was stated that the animal stood over 4 foot high and was 7 foot long. It’s skin was removed and sent to the Melbourne Museum for identification. It was determined that the animal was an exceptionally large domestic dog gone wild.

In October of 1934, seven months after the dog was shot, another wild dog was seen in the same area. Mr. W. Beck observed an animal of a similar type and nearby were two pups. He discovered a litter of pups in a wombat hole and he removed them, selling them off to people in Melbourne. Wouldn’t you be thrilled to get that bargain? 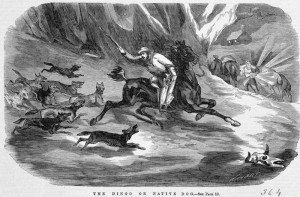 Photo courtesy of the State Library of Victoria

You would think that would be the end of the “big cat” stories but it is far from it. In February of 1935, Mr. R.A. Estoppey, the assistant inspector of fisheries and game wrote to Wirth Brothers Circus regarding a strange animal that had been seen in the Briagolong area. It was described as a cat like animal 5 – 6 foot long, yellow colour, plainly striped and about 2 – 3 foot in height. he states that he has measured the footprints at different times and places. “They are 6 in. long and 4 1/2 in. wide. The animal takes a stride from 3 1/2 ft. to 4 ft.  Footmarks around a waterhole where it has been drinking show that it’s front paws have five toes, whereas a dog has only four. In places where the animal has been lying we have found fur 2 in. long, some black and some yellow. At night the animal makes a low moaning sort of noise, like a person in pain.

Mr. Emil Payer, wild animal trainer at Wirth’s said that this description tallied almost exactly with that of a tiger. ‘Nevertheless, he said, ‘it is not a tiger, because a tiger must live on meat, and he leaves bones strewn about. Here there is no evidence of anything or anybody having been killed’

Giving further details to the ‘Herald’ reported Mrs. Estoppey said that the animal was only a mystery so far as the genus was concerned. Residents were positive that it existed and it’s tracks were plainly visible after rain. The animal seemed to be approaching closer to the settled area- it had been seen only a mile from her homestead, six miles out of Briagolong.”

And just for something different, in August of 1935, a strange animal is observed by Mr. E. Curtis and described as being like a large dark brown grizzly bear. In September, three hunters left their “kill” under a tree while they continued on their hunt. When they returned in the dark, they found a large animal in possession and they beat a hasty retreat leaving the animal to have it’s meal in peace.

And then in June of 1936, a report was published in the Argus about a giant dingo poisoned in the Upper Maffra area.  The giant dingo supposedly measured 8 foot (2.5 metres) from head to tail. The body was “brightly yellow, the tail is large, bushy and white-tufted, there is a dorsal stripe of white, and it’s size is extraordinary.” It was thought that the dingo was so large that it may be a new species.

The reports don’t stop there although they are quite markedly reduced. In 1937 a large animal is seen near the beach on the Mornington Peninsula. In 1946 a mystery animal was spotted in Queensland. In 1952 a “lioness” was seen near Beaumaris in suburban Melbourne and in 1956 a beast was cornered near Wonthaggi. And so the search continues.