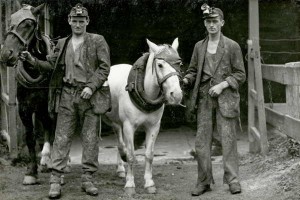 From 1909 to 1968 The State Coal Mine at Wonthaggi employed hundreds of boys and men but they also employed workers who never received a cent, the little horses called pit ponies. These little ponies were not children’s pets or riding animals. Often they would be bred specifically for the job as they had to be strong and shockproof. They were taught to react solely to voice commands and they learnt to trot with their heads down. Their size varied from 10 to 14 hands and usually they were thickset and broad across the chest.

These were remarkable animals. When the Governor-General, Sir Thomas Gibson Carmichael visited the mine, three of the ponies put on a show for the royal representative. A pony called “Baldy Face” bowed twice to his Excellency, counted two, four, six, eight, ten. and also answered yes and no to questions.  He then skipped a jumping rope before laying down at the Vice-Regal’s feet. A pony called “Little Titch” wore a rough yellow suit, hobnailed blucher boots and a little tweed cap cocked on one side of his head. A special little pony was “Blind Dick” who despite his lack of vision was one of their best workers. He had to be led into the mine but once underground knew the workings like the back of his hoof and was able to do his job unaided.

A pony worked an eight hour shift, five days a week. They travelled underground in an elevator type cage, two at a time and once down would be harnessed and used to drag the skips along the miles of tunnels and shafts. The work was hot and dirty so at the end of their day they travelled back up to the surface, the cage door opened and like children after a day of school would race to their stalls before being given a bath and a feed each night. On weekends they were turned out in the lush green paddocks around the mine. 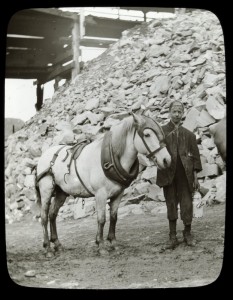 Boy with pit pony, somewhere in Victoria 1904 – 1906. Photo by Arthur Fox, gift of Mrs. Joy Webster courtesy of The State Library of Victoria.

By the 1930’s there was some concern by the miners regarding the use of the ponies. There were two ways in which the harness could be made, one was dangerous to the miners and the other dangerous to the ponies. The pit ponies were an expensive piece of “equipment” to the mine and it seems the managers chose the lives of the animals over the lives of the workers. The miners fought the decision for years, striking on a number of occasions. Each time a strike occurred the little ponies got a holiday and were turned out to pasture. Although their lives were ones of drudgery and hard work, the Wonthaggi ponies were well looked after compared to the ones overseas.  In Europe and the UK there had been numerous strikes regarding the inhumane way that pit ponies were used and abused.

A number of disasters occurred at the Wonthaggi mine. In the 1937 explosion, thirteen miners lost their lives along with one of the pit ponies. A massive recovery job was done to bring out the bodies of the miners and that of the pony. In 1964 a fire in the lift room put the elevator out of action. All the miners were able to climb to the surface but 8 ponies were stuck underground for 7 days. Mining was a dangerous job, and Wonthaggi wasn’t the only mine to suffer disasters. In 1953 a fire at the Lithgow (NSW) mine killed 21 pit ponies. 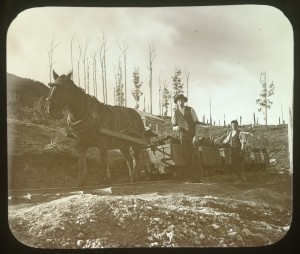 Pit pony hauling a rake of loaded coal skips at the Outrim Coal Mine (near Wonthaggi) in 1897. Photo by John Henry Harvey, courtesy of The State Library of Victoria

The coal that was mined at Wonthaggi was used primarily to feed the hungry train system in Victoria. By 1968 these steam trains were being phased out and diesel locomotives were in use. The Wonthaggi mine was the last of the underground coal mines and it was shut down, putting the miners and the ponies out of work. It is somewhat reassuring to know that most of these lovely little workhorses found homes with sympathetic families and miners.