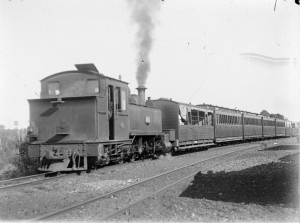 The year was 1919 and the steam train between Melbourne and Kurumburra was chugging along through the frosty winter night. On board was Fred Mills, the fireman/stoker and he was kept busy feeding coal to fire to keep the boilers burning. As the train climbed through the hills near Nyora, Fred clambered on top of the coal pile. Balanced there, he sighted a strange bundle reflected in the moonlight on the sloping carriage roof behind the engine. He climbed back down and reported his find to the engine driver. When they reached Korumburra they discovered the body of a young man in a gaberdine overcoat face down on the carriage roof. 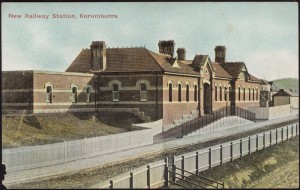 The police were called and the body was removed to the railway station waiting room. Each person on the train was questioned and asked to view the body in an effort to discover the identity. The corpse turned out to be that of 20 year old Alexander Eastman, a butcher from East Prahan. Alexander and his 3 older siblings were orphans and had been raised by their mother’s brothers and sisters in East Prahan. Alexander was a well liked and respected young man and on the night he died, he was travelling with his Aunt Annie to visit a relative in Koo Wee Rup. At Dandenong, Alexander saw someone he knew and excused himself to visit with the mysterious stranger. When his aunt disembarked at Koo Wee Rup she couldn’t find her nephew and assumed that Alexander had left the train at Dandenong with his friend and would make his way to Koo Wee Rup on the next available train. Little did she know that she would not see Alexander alive again.

Alexander’s death was mysterious. There were no serious signs of violence although he did have a small gash on his chin. His body was found face down on the roof of the train amongst the soot from the coal burners. The coroner performed an autopsy and declared that he had died by suffocation. His hands were in his pockets and missing was a gold ring from his finger and some cash from his money clip. How he came to be on the roof of the train remains a mystery today. The missing ring and money would make robbery a obvious theory but he still had his gold pocket watch and cufflinks on. There was also no signs of his body being dragged on the roof.  The coal dust was thick and the tracks showed that he crawled on his hands and knees. There were no tracks on the roof but his own. Regardless it would be a dangerous and difficult job to move a heavy body up and onto the roof. Theories abounded. Some stated that he must have dropped or was pushed from a low bridge onto the roof of the carriage but this was discounted because if dropped from a bridge his body would have sustained more injuries. Regardless there were witnesses that stated he was already on the train. Another theory was that he was trying to fare evade but a valid ticket was found in his pocket. Then of course there was the possibility that he was trying to travel in a first class carriage when his ticket was for second class but this seems unlikely as he had crawled beyond the area where he could descend to enter the first class carriage.

Today the train line is all but gone. Alexander’s aunt would have stood on the platform in Koo Wee Rup behind the present Woolworths Supermarket. Alexander’s dead or dying corpse had travelled on the carriage roof past Lang Lang, through Nyora, Loch and Jeetho until the train reached Korumburra. Today the beautiful heritage listed train station in Korumburra gives little clue to the mysteries that it has seen, including the tragic death of Alexander Eastman.

Relevant The Corpse on the Korumburra Train Links