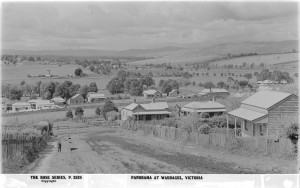 View of Warragul, possibly 1920’s. Photo from Rose Series, courtesy of the State Library of Victoria

In the Warragul Guardian on Thursday the 2nd of August in 1883, it was reported that Warragul has it’s first “ghostly visitant”. The article states that “It is now a month or two since it became rumored that one (ghost) had been seen and heard inside a certain little cottage situated upon a property distant about a mile from the Warragul Post Office”.  A mile from the Post Office would, very roughly, put the cottage somewhere on an imaginary circular line drawn between the Warragul Cemetery, Western Park, the West Gippsland Hospital and North Road, returning to the cemetery.

The article went on to say that the cottage was owned by “a well known and rather popular resident of our district, who is also known as the proprietor of more than one celebrated racehorse”. I have spent considerable time trying to find a local figure who fills the description but I’ve been unable to pinpoint either the owner or the location. It should not be difficult to discover where the cottage was located because Warragul was a very small settlement prior to the railway coming through in the 1870’s. This was so, because of the difficulties in traveling from Melbourne to Gippsland. Between Pakenham and Warragul lay “the gluepots” a stretch of road that became so muddy that horses and bullocks became stuck. The Bunyip River had to be crossed and The KooWeeRup Swamp also hindered travel. This isolation meant that selections and settlement was later than in other districts- so it should be easy to pinpoint a cottage that stood in, say, the 1860’s. Unfortunately this is not so, but then, I haven’t given up yet.

The article then goes on to say  “The house itself has for some months been tenanted by a Mr. and Mrs. C.- with a family of young children, and some weeks ago Mrs. C.- became the mother of a female infant, the only peculiarity about which is that the child is a remarkably small one, about half the size of an average baby. Now it would appear that this lady was the first to both see and hear the apparition. At different times she called the attention of her nurse, an assistant nurse, her own husband, his sister, two male lodgers and the members of her own family to the phenomena and most of them are positive that they heard distinctly the sound of light velvety footfalls though none besides the lady herself were able to see anything. She, however is quite certain that the spectre was seen with great clearness by her own eyes upon a number of different occasions. Upon one occasion when stooping to pick something off the floor beside the sofa, she was horrified to find it sitting just in front of her, and on it starting up and vanishing through a closed door, she fainted away.The figure is described as that of a tall spare man with a light grey beard and moustache. It’s usual time of appearing is between two and three o’clock in the morning. “

The article goes on to question the fact that witnesses had heard velvety footfalls yet the mother states that the apparition glides through the room. Following on the article says “The only present explanation that can be given of the ghost’s nocturnal visits is that, according to the oldest inhabitants in the locality, there stood near the present house in the scrub, a little paling hut, from which an old man, suddenly and mysteriously disappeared. There was also a well, a few paces off, that was shortly afterwards filled with earth and a new one dug nearby.”  I have searched through old newspaper reports for any item that may give credence to the story of the old man and the well but I cannot find any other reference to his disappearance. Whether any of this is true- who knows. For it to be published in a local paper about local people with some major clues to their identity is quite unusual. 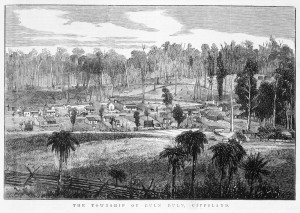 The township of Buln Buln (originally called Brandy Creek) in the 1880’s. Image courtesy of the State Library of Victoria

Just three years later, another strange story was published in The Warragul Guardian on the 27th of May, 1886.  (Punctuation and spelling as per the original article)

There has been considerable excitement in Warragul, Buln Buln and the neighborhood lately owing to a ghost having made its appearance in a gully near the farm of Mr. H. Rodgers. The apparition having been seen by more than one person, a party of four started one night to hunt it, the leader being armed with a gun. Suddenly the spectre appeared when the man with the gun dropped his weapon and fell down in a fit, while two of his companions ran away, and the third, after running some distance, returned and assisted his leader home. Such an effect was produced on this man that we hear that he has had more than one fit since, and will not now sleep in a hut by himself as was wont before he saw the ghost. The young ladies in the neighborhood are disconsolate, we understand, because their lovers will not dare to visit them after nightfall. We were informed on Saturday last that a large party had been made up to go and hunt the ghost and that members of the rifle club had been requested to join in, but as the riflemen subsequently declined on the ground that as the price of ammunition had been raised, they could not afford to expend any on ghosts, the scheme fell through. For the sake of the young ladies whose distress we have referred to above, we think some of our gallant defenders might turn out and see what the ghost is made of. They can have the loan of the devil from this office if they promise to return him safe and sound.  The members of the party actually started to hunt the spectre last Monday night, and who no doubt would have succeeded had their courage not failed just as they approached the cemetery.”

As usual with any publication you must question whether there is any truth in such a story, so imagine my surprise when I found that a Mr. Rogers did indeed live in the area. His farm was in Ryans Road, (off Platts road) in Buln Buln. Muddy Creek runs through the area and so there was probably a gully nearby. Another interesting aside is that with these local ghost stories they often have a landscape where the terrain is steep or cut away. I have written about the haunted cutting and Haunted Gully in Beaconsfield, Haunted Hills in Gippsland and now the haunted gully in Buln Buln.

Relevant The Ghosts of Warragul Links