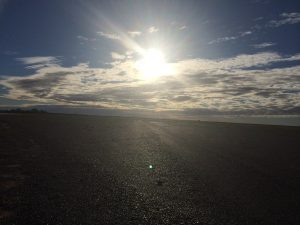 One of the most unusual mysteries in Australia are the famous Min Min Lights. Described as large glowing balls of light that dance or float just above the ground, they have been witnessed by tens of thousands of people. They are seen moving rapidly, floating or just remaining perfectly still. They glow like giant orbs and sometimes hover before disappearing as though someone has blown them out. I have been interested in these lights for years so have queried people about seeing them while we have been travelling through outback South Australia, New South Wales, Queensland, and the Northern Territory. About one in four long term outback resident seems to have witnessed them but it also seems to be a disappearing phenomena. It is my belief that the sightings are diminishing in recent years with most being before 1990. I have no idea why this would be so and I would love to be proved wrong.

Over the years, scientists have tried to explain the lights using a number of theories. Phosphorescent gasses released from underground sources, flocks of insects coated with bioluminescent particles from fungi but the Fata Morgana mirage theory holds the most credibility. A Fata Morgana is a complex mirage where air passes through a thermal inversion and light is bent. The area around Boulia and the Channel Country provides perfect conditions for this type of event but so too do many other parts of Australia and the world. The big problem I see with this theory is that most Fata Morgana mirages (overseas) seem to occur during daylight hours. They show mountain ranges, boats, harbours and even cities yet I haven’t found any reports of similar styles of mirages like this in outback Australia. You never hear of phantom sand dunes hovering in the sky or upside down road trains as a Fata Morgana would normally produce. The second issue I have with this type of “mirage” theory is one that as any out back traveller can testify to. That if these lights are a reflection of headlights and that most of the roads on which these lights were seen are deeply corrugated, especially in days gone by, then the orbs should be jiggling and jumping all over the place. They should not be floating sedately and serenely along. If we are talking a single light which remains stationary (which some do), then that is very plausible as a mirage of the moon or the reflection of a light from a station homestead but when the orb moves rapidly and floats, questions remain about that theory.

There are many books with eyewitness accounts but not much of the history of the Min Min Hotel. Many people who see these lights believe that they have witnessed a UFO sighting as the orbs movement is so unusual. It is only after they have spoken about it with others that they relax and begin the understand what a widespread phenomena it is. I can’t comment on any of these things but decided to investigate the historical reason the lights were given their name and along the way made a rather interesting discovery about a tragic Australian woman. Whether it has anything to do with where they have originated from, I’ll leave you to decide.

On the 20th of December, 1934 a poem was widely published in the newspapers. This is the poem which I believe led to the notoriety of the Min Min lights. Written by D.B O’Conner, it follows the story of a horseman who tells the tale of riding near the Min Min Hotel when he sees a “phosphorescent bird” and becomes frightened  “So I bolted as the Kaiser” and he rides non stop all the way in to the nearest town which I believe was meant to mean Boulia.  As this poem was released across the country, more and more reports of the lights spread but the area around the Min Min Hotel was the centre of the greatest activity. 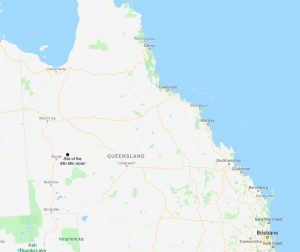 Although there are some sightings of the lights pre 1930’s most are after the poem was published and by then they are widely reported in newspapers as being seen over the the graves at the back of the ruins of the Min Min Hotel.

The hotel site is just off the road between Boulia and Middleton (Channel Country), Queensland. Built in the early 1880’s, the hotel was a stopover for the Cobb and Co coach as it made it’s way from the remote stations at “Boulea” to Winton. One of the first hotelkeepers was William Thomas Cobley Lilley, whose wife died in 1897 and is buried across the creek from the hotel site. Her grave is well kept, very different from the graves behind the ruins of the old shanty known as the Min Min.

It was in 1889 that James Collins, a labourer died of thirst on the road near the Min Min Hotel. The weather had been unbearably hot with temperatures recorded at Winton of 114 deg F (45 deg C). During this period in history, when people died they were buried near the nearest human habitation. James died within 4 miles of the hotel and the back of a hotel was a common practice.  It is pretty safe to think he might be one of the first burials behind the Min Min.

William Lilley held onto the licence until 1912 when he handed over to Jane McMillan. Jane is very mysterious, she is only around for a short while and then she seems to simply disappear after she hands over to Agnes Evelyn Hasted in 1915. I have done extensive research on Jane McMillan but to no avail. It is possible that she passed away and was buried out the back of the hotel site.

Agnes is the woman who interests me the most. When Agnes took over the hotel she had already lived a difficult and tumultuous life. Her early years were spent as a domestic servant in the UK before heading out to Australia with her brother. In the lead up to the purchase of the hotel, she had lived many years in the district and she registered stock brands so must have been involved in the breeding of cattle. Agnes had her first dealing with death near the Min Min when she helped William Lilley during the tragic death of his wife in 1897 and then shortly after, her brother in law was all over the newspapers. He had murdered his wife while his children slept beside and then attempted to take his own life.

Life dealt Agnes her first personal blow in 1898 when her 9 year old son was lost at Thompson’s Tank next door to the Min Min Hotel. He was found barely alive but so badly eaten by ants that he perished on the way to Boulia. It was within a few years that I can find the earliest written or documented references about the lights. The notes were published in a newspaper in 1926 and suggested it was 1902 when they were first seen in the district. The article goes on to say that they were again witnessed in 1914 when kangaroo shooters let off their rifles at the lights with no reaction. Just prior to that, in 1912, Agnes had lost another child by the name of Horace Frederick Hasted, aged 4.

By 1915, Agnes had taken over the licence and ran the hotel on a shoestring. Some newspaper reports refer to the hotel as a shanty giving the appearance of it being somewhat disreputable. Most of the time Agnes ran the hotel with only the help of a domestic servant although her son Lionel lived on site. She and her husband had split and he had moved to Winton where he worked as a carrier. In the beginning, the domestic servant was a girl by the name of Mary Mathieson who vanishes about 1916. It is possible that she lies in another one of the graves out the back and may even be the source of some of the very interesting tales that surround the hotel during this time. It was reputed that one of the ladies at the hotel would make sure that the menfolk were always “comfortable” during their stay. It was after this that Agnes’s daughter in law, Gladys joined her in running the hotel. 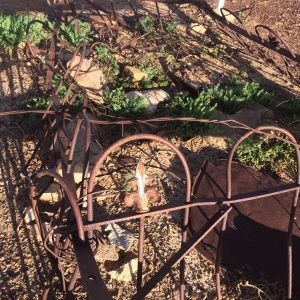 And then again tragedy struck Agnes and her family. Agnes had only one relative in Australia, a brother by the name of Harry Springthorpe, who was working on nearby Warenda Station. In October of 1917, he and a number of others were employed in fighting a bushfire. The buggy that they were on became encircled by lighting and was in long grass. The men got out and ran but fire overtook them. When found the next morning they were still alive but described as having been “roasted”. Harry and another died before the Cobb and Co coach could get them to hospital in Boulia. After the inquest it was stated that the men were buried in Boulia but I can find no mention of Harry’s grave in the records of gravestones. The fact that Agnes had a private graveyard behind her hotel and that he was her only sibling makes me think that she would have wanted his body close by. It is very possible that he is in another of the unmarked graves.

It is only a few years later that lightening and fire comes again to haunt Agnes. It takes her livelihood and leaves nothing but ruins and graves to mark the spot where 40 years previously stood a beautiful new country hotel.  On February 22, 1924, a huge storm came through the area, the railway was washed away between Hughenden and Winton and there were many reports of lightning strikes. Shortly after came the news that the Min Min Hotel had been destroyed by fire.

Agnes’s life didn’t end there. She moved to Townsville but was a regular visitor back to her son’s establishment the nearby Hamilton Hotel and from all accounts this hotel was a much better place of business. It regularly raised money for the hospital in Boulia, was a place for excursions for the nearby townsfolk and held country athletic meetings in the sports ground behind the hotel. But Agnes’s life of tragedy was not over yet. In 1922 her son Henry John died, aged 26, with another son’s wife dying at 23 years old and another daughter at the age of 30. Agnes then took on the raising of her grandchild. In 1953 Agnes passed away and was buried in the same area that is famous for the lights. Her grave is at the Hamilton Hotel ruins, right next door to the remnants of the Min Min Hotel.

The story of Agnes and the Min Min Hotel seems to be one of fire and grief and the lights of the Min Min are quite prevalent during the period of Agnes’s reign. There is no question about the lights being seen all over outback Australia later but I am just looking at the death and tragedy surrounding this one woman, the era in which we have documented evidence of those first sightings and the area which gave the lights their name, The Min Min Hotel.