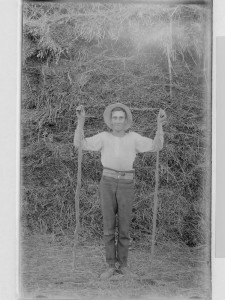 Two snakes in Gippsland circa 1890. Photo courtesy of State Library of Victoria.

On the morning of Monday the 12th of October, 1891, John Hourigan an engine driver and inspector of pumps on the railway, “received a bite on the hand from a black snake whilst oiling the plunger of the pump at the Pakenham Railway Station. The effect of the bite was nullified through Hourigan scarifying and sucking the wound, and the result was only a slight drowsiness. On Friday morning however, whilst Hourigan was again oiling the plunger, he was bitten on the same hand, presumable by the same snake. the fangs penetrating so far that Hourigan had to pull the snake off with his left hand.” Hourigan hurried to the stationmaster who put two tourniquets on his arm and sent him off by train to Dr. James in Berwick. Dr. James injected him with strychnine (yes, strychnine) and then posted him off to Dr. Moore in Dandenong.

When he arrived in Dandenong, he was in a state of stupor, so he was taken to a chemist shop by the good doctor who injected him with another dose of strychnine. Dr. Moore then employed two “stalwart sailors” to walk Hourigan up and down the street between them.  “This strange sight attracted hundreds of  the citizens who evidentally were deeply interested in the proceedings.” 40 minutes later Hourigan became worse so he had another injection of strychnine but this time they also injected him with ammonia and gave him some brandy. The sailors and other volunteers kept him walking up and down the street. Twice more he went through the same procedure until he finally collapsed and had to be carried to the chemist shop. At this point he was described as being “quite black in the face and his figure appeared to have shrunk to half it’s original size”  This time they injected him with ether (an early anesthetic). There was no response so they connected him up to a “galvanic battery” which was attached at the back of his neck and to the chest. “The apparently dead man was not only galvanised into life, but he became nearly mad with rage.”  Dr. Moore decided that a congestion of the brain had occurred and so opened a temporal vein, “but the blood was so thick that cupping had to be adopted, by which 4 oz (.11 of a litre) was taken away.”

Poor old John was connected up to the battery until the middle of the night with Drs. Moore and Smith using the battery. John recovered but said “that he had a strange feeling of numbness, but the pain from hundreds of needles driven into him to keep him awake is almost unbearable”.