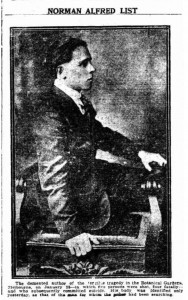 On the 2nd of February, 1924, an orchardist named Charles Johnstone was picking bracken fern for his chooks on the Deep Creek near Army Settlement road at Pakenham. He noticed flies swarming and went to investigate. Near a pool of water he found a body which turned out to be that of Norman Alfred List. Constable Stanbury from the Pakenham Police with the help of Messrs Johnstone and Kennedy removed the body and took it to a small shed at the back of the police station in Main Street.

List was wanted in connection with the shooting deaths of four people and the wounding of one. Although the body appeared to have a broken neck it was found that Norman Alfred List committed suicide by cutting his wrists. It was also found that he had not been in the Pakenham area long and it was probable that he had camped out closer to the city first. List had a number of cousins living in Pakenham but he had not made contact with any of them and they were exonerated of any involvement with List.

Nine days earlier, on a beautiful summer’s day at the Melbourne Botanical Gardens, families were taking advantage of the weather and were enjoying the sunshine by having picnics, resting on the lawn or just strolling about the gardens. At 4:30 pm, the lone gunman using a .44 repeating rifle opened fire, shooting five people, killing three and injuring two. The gunman had entered the gardens carrying a brown paper parcel with a rifle inside. Hiding behind bushes and moving between garden beds he pulled out the gun and began shooting. He was unknown to the victims, his aim was incredibly accurate and the entire massacre was over within 5 minutes. Most of the victims were unaware of the killer and no alarm was raised until the shooting had finished. List threw the rifle into the bushes, jumped a fence and disappeared.

The five minute killing spree left Fredrick William Mcllwaine, Mrs. Eugene Strohhaker and Mrs. Miriam Podbury dead. Mr. John Moxham and Mrs. Marie Parry were injured. Mr. Moxhan later died of his wounds. In a unique twist to this story a Melbourne detective “borrowed” the gun from the evidence locker and discovered that the rifle was defective.  The toll could have been much greater if the rifle had continued to work.

With no motive and very few witnesses, the search for the killer was slow. The rifle was discovered in the bushes and by tracing the purchase of the gun, the detectives were able to get a description of the killer. Searches began for any person who was reported missing from their work or lodging and they matched these with the description given to them by the gunsmith and the few witnesses from the Botanic Gardens. It was in this way that Norman Alfred List was identified as a suspect.

Melbourne was in panic. There were reports of List being seen in Kensington, Footscray, Mornington, Maryborough and Tallangatta. There was even a report that a man dressed in women’s clothes, carrying two suitcases and matching List’s description at the railway station at Inglewood. The police were busy chasing these reports while trying to keep the public calm. The days marched on and still List was not found. The public had every reason to believe that List would pop up again and start shooting.

List was 30 years old when the shootings occurred. His mother was dead but his father and four brothers and sisters were living in Melbourne. He had spent some of his early years visiting his grandfather and playing with his cousins in Pakenham. Later his father purchased a 80 acre farm in Cockatoo and when his parent’s marriage failed, his mother took the children to live on the farm.

While living in Cockatoo, List’s brother Wilfred was involved in the shooting death of a neighbour. A man named Hugh Bell was engaged to marry List’s sister and while out working on the List property with Wilfred he was shot in the back of the head, the bullet coming from Wilfred’s gun. There was a long court case where Wilfred gave two different stories about what had happened and it was eventually determined that the death was accidental. A further court case arose because the List family would not return the belongings of Bell to his family.

List had spent a number of years working overseas. He was described as being introverted, scholarly, a hard worker and then evidence came out that he had a persecution complex. He spent all of his wages on books and studied electrical engineering. No explanation was ever found to show why he did the murders or where he was before making it to Pakenham.