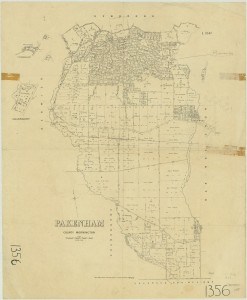 1883 Map of Beaconsfield to Upper Beaconsfield and Pakenham. Photo Courtesy of The State Library of Victoria.

Beaconsfield and the Central Hotel started life as one of the original squatters licenses in the area. The station was called Panty Gurn Gurn and the original homestead building became the original hotel. The Cardinia (also spelled Kardinia and Kordinia) Creek was the boundary between the central regions of Victoria and Gippsland region and hence the original name of the hotel was the Gippsland Hotel. The hotel truly was the centre of the township by the late 1860’s. With a racetrack out the back and the Gippsland road passing the front door, much of the daily business in the region was carried out within this building.

David Bowman was the first licencee and following his death his wife Janet took over the licence. Janet was an enterprising lady who paid two men to cut a track to the Gippsland goldfields thereby ensuring a steady passing trade. Janet maintained until her death that she built the track because the Govenment of the day stated that they would reimburse the public for financing infrastructure such as this. Janet fought a long and protracted legal battle for compensation. The fact is though, that this track was essential to her business as the Gippsland road (later known as The Princes Highway) was impassable for much of the year.

The train line opening in 1877 was very important to the community. Previously the travel time by horse into Melbourne was a tough three and a half hour journey. Suddenly commuting was an option with the journey time cut down by half. Many people chose to spend weekends or holidays in the area. The economy boomed and farmers could get their produce to the Melbourne markets in record time.

The opening of the train line did other things as well. Woods street connected the existing Gippsland road to the new train line and shops and businesses sprang up to take advantage of the passing traffic. The post office and Paternoster’s Store were built. Adamson’s Hardware Store serviced the men folk and of course a cold beer could always be found at the Hotel.

A little boy is found hanging by his arm off the Cardinia Creek bridge.
Read More...

A doctor, a showman, a publisher and a museum owner, Dr L.L. Smith was one of our more unusual characters.
Read More...