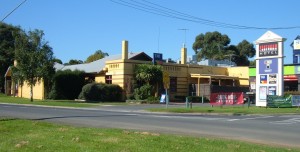 The Highway Hotel, Pakenham in 2013. Today all that remains of the original hotel is the chimney.

Until recently the Highway Hotel at the corner of Toomuc Valley Road and the Princes Highway in Pakenham had survived many natural and man made disasters. If it’s walls could have spoken we would have heard stories of bushfires and floods, grisly tales of death and murder but also stories of community gatherings, births and joyous occasions.  This hotel was the centre of life for the people of “old” Pakenham (“new” Pakenham being Main Street and the railway station area). The hotel was a polling place for elections, a seat for local government, the official post office and a stopping place for weary travelers commuting between the goldfields of Gippsland and the bustle of Melbourne life. Sadly, all that remains of the original building now is the chimney.

Originally called the Latrobe Inn, the license for a public house (pub) was first issued to a James Mahony in 1847 who then transferred it to James Curran. Michael Bourke saw the prospects of the hotel and purchased the license in 1849. In 1851 the Black Thursday bushfires caused widespread devastation and wiped out much of the local area. There are reports that the temperature on that day reached 47 degrees C (117 degrees F) and that the hot northerly winds made it almost impossible to breathe. The Bourkes had recently purchased the hotel and Catherine was in residence with her small children when fires surrounded the building. Her husband, Michael Bourke, was at their station property about 4 miles up Toomuc Valley Road (opposite the property now known as “Seven Oaks”). Michael exhausted his water supply and used the fresh milk from his dairy herd to extinguish the fires before word reached him that the hotel was encircled by flames. He found Catherine and the children crouched in the stagnant water of the almost dry Toomuc Creek. The family, the hotel and the station all survived and went on to be a driving force in the settlement of the Pakenham area. 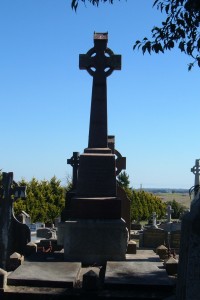 Amongst many memorials to the Bourke family the most important is Michael and Catherine Bourke’s, the elders of the family dynasty.

Both Michael and Catherine were remarkable people. They married in 1838 and left Ireland on the same day as the marriage but because their marriage was not registered the ship’s captain would not have let them travel as husband and wife. They had to wait until they reached Sydney in April of 1839.

They were part of the first contingent of the Monteagle Emigrants, Irish migrants who made the journey with the financial help of Lord and Lady Monteagle. Even before the famine, poverty was rife in Ireland and the Monteagles saw a need and helped more than 730 Irish men and women travel to Australia over a 20 year period. All of the migrants came from the area around Shanagolden, the district in which the Monteagle property was situated.

Melbourne was a primitive town in 1839 when the Bourkes made their way down from Sydney. White settlement had preceded the Bourkes by only three and a half years. Catherine and Michael worked for a while in Melbourne before managing a dairy farm in Moonee Ponds and then saving enough money to take up a squatters licence on the Toomuc Creek in 1844. At the time there were only nine white settlers in the district and the Gippsland road (Old Princes Highway) was little more than a goat track. As far as the eye could see, in all directions, was thick native bushland.

In the 1850’s two of their children died. This was not an unusual occurrence, childhood diseases were rife and there were no doctors or services in the district. This was also prior to the establishment of the Pakenham cemetery and so the children were buried near to the hotel or on the station property. Unfortunately their graves were unmarked and there is no exact knowledge as to their position although it is believed that they may be buried at the back corner of the hotel carpark.

As Michael and Catherine prospered they invested in land and businesses – primarily in the Pakenham district. Michael became a representative on the Berwick and District Roads Board (a predecessor to local council) and remained in control of the hotel until his untimely death caused by a fall from a ladder in 1877. Catherine then took over the licence and continued to run the hotel for the next 33 years, giving up shortly before her death in 1910 at the age of 91. Catherine had her share of heartache. She had lost her husband, seven of her children and one grandchild by the time she passed away. She had braved drought, fire, floods, murder and loss. And she did it with grace and courage.  She was a remarkable bush pioneer.

Robert George Fry was a 32 year old labourer from Pakenham. On the 21st of August 1889 he was found brutally murdered in a hut at the back of Bourke’s Hotel. His face was so bloodied that it was stated that every bone in it had been broken.  There was a large quantity of blood on the floor of the hut and the doctor who did the post-mortem examination stated that “great violence must have been used in the blows”.   Near the body was a hand implement similar to an axe called a bull hook or slasher which was used for clearing ti-tree. The slasher also had a combination of blood, hair and mud on it.

The hut at the back of the hotel was used as a resting place for patrons who had too much to drink. Some reports state that it was also the temporary residence of a man named MacNamara and that he was a mate of the victim, Robert Fry. On the night of the 20th of August, Fry was lying on a sofa in the hotel. He had complained of feeling ill and Catherine Bourke gave him a cup of tea. Catherine told him to go home or to go the hut and rest. The following day Catherine sent a man to check on Fry. He returned and said that there was a man dead in the hut. Robert Fry had been brutally murdered. His body was jammed against the door and the police were called.

John MacNamara was a day labourer in Pakenham. Catherine Bourke stated that on the night before the murder she did not like his appearance and refused to serve him.  He made his way to to the pub near the railway station. A witness said that he was there at 2 pm and again between 10 – 11 pm on the night of the 20th and saw nothing strange in his demeanor. The following morning the witness saw him with a little dog on the veranda of the same pub. From the manner in which he was speaking to the dog and his wild appearance she felt that he was suffering delirium tremens. A young boy, John Robertson, observed him walking towards Bourke’s Hotel at 7 am on the morning of August 21. He was not wearing a hat and was talking wildly to his dog, telling the dog that he should study astronomy. At 8 am, the same boy saw McNamara at the store near Bourke’s Hotel and he had a hat on. He also had blood on his cheeks, nose, the backs of his hands and on his chest. Another witness saw him at 7:45 am on the 21st and said that he had blood upon his hands and face and he had a rose or camellia flower in his hands and was talking incoherently to it. Yet another witness said that he saw MacNamara on the afternoon of the 20th and he was punching a telegraph pole with his fists as though fighting it. He was also talking to a tree which he said “was a detective in disguise, after him”. Two mounted constables were sent out to find him. He was arrested near the Bangholme railway station.

On the fifth of September 1889 an inquest was held at the Mechanics Institute on Station Street Pakenham The inquest’s findings were “That on or about the 20th day of August at Old Pakenham, Robert George Fry died from injuries inflicted upon him by John MacNamara with an implement known as a “slasher” and we find the said John MacNamara guilty of willful murder.”

On the 27th of September 1889 at the Supreme Court, before His Honor Mr. Justice Hodges, a jury found John MacNamara not guilty by grounds of insanity. His honor then ordered that the prisoner should be kept in strict custody in the Melbourne Gaol until the pleasure of his excellency respecting him was known. In November of 1889 he was transferred to the Ararat Hospital for the Criminally Insane. The records stop there and there is no mention of when or how he died. One year later John’s brother, Edward was described as an eccentric vagrant whose behaviour became dangerous when he was under the influence of alcohol. He was brought before a magistrate and incarcerated for six months.