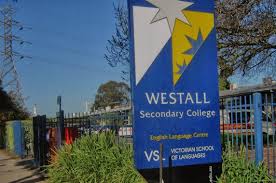 Have you ever seen a UFO? Well if you have, you are not alone. In April of 1966, up to 400 people witnessed a grey saucer shaped craft fly over the southern corner of Westall High School (Clayton South) before it descended into a nearby paddock. A few minutes later, as stunned onlookers watched, it lifted off and was pursued by five small cesna type airplanes. Some of the onlookers ran to the paddock and saw a perfect round “crop circle” in the grass.

Now for all you sceptics out there, it is important to remember that some of the greatest scientific minds (including Stephen Hawking and Carl Sagan) both believe(d) that alien life forms are not only possible but probable simply due to the vast number of planets out there. The sheer number of UFO sightings and the wide range of people who have witnessed them makes even the most sceptical of us question the possibility of extraterrestrial life.

A high school teacher and her class of students on the playing field were the first witnesses. This gradually increased to include other teachers and students from the high school and also teachers and students from the nearby primary school. Within minutes local farm workers and residents also stood by and watched with gaping mouths. Despite the large number of onlookers the newspaper reports regarding this event are remarkably silent. It has been reported that the Age newspaper ran a very small article, while The Sun News Pictorial did not. The main reports were via the local paper, The Dandenong Journal, who ran the story on the front page for two weeks.  Channel 9 television did a report about the event but at a later date the tape was removed from their library and not returned (Wikipedia). Based on this you can’t help but question a conspiracy theory.

In a very in-depth and interesting article written by Shane L. J. Ryan who interviewed many of the eyewitnesses (http://localhistory.kingston.vic.gov.au/htm/article/528.htm), he mentioned the air of secrecy and the numerous military/government/police who attended the site after the event. The area was quickly cordoned off and personnel in camouflage gear took charge of the paddock. Some of the school children remember that the high school was pandemonium and, in an effort to gain control, the headmaster gathered everyone together for an assembly immediately after the event. He was flanked by men in suits or uniforms and he made it very clear to everyone that there was no such thing as flying saucers.

UFO sightings seem to come in clusters and the 1966 sightings are no different. On the 8th of July 1965, a group of scientists in the Antarctic reported seeing “an unusual celestial body hovering on the horizon and sending geomagnetic instruments wild”.  On the 21st of July, Mr. Denis Crowe, a former British diplomat and army officer reported seeing a disc-shaped object over Vaucluse. On the 24th of July it was reported that there were two sightings near Canberra and one was reported by the air traffic controllers. 21 days before the Westall sighting, numerous UFOs were seen in Michigan USA and were reported by up to 100 people including police, sheriff officers and William Van Horn, a US civil defense director. On April 2, 1966, just 4 days before the Westall sighting, a polaroid photo was taken of a UFO over Balwyn, Victoria. The most disconcerting report was made two days before the Westall incident when a Mr. Ronald Sullivan in Maryborough Victoria stated that, on April 4, he witnessed a display of gaseous lights in a nearby paddock. The lights on his car diverted to the right and he managed to pull up his vehicle before he crashed. Three days later, a young driver by the name of Gary Taylor crashed his car and died at the same spot. Nearby was a circular depression in the ground 20 feet wide and 5 inches deep.

The Westall UFO had up to 400 eyewitnesses. It was seen in broad daylight and it remained in the same area for more than 20 minutes. The eyewitnesses reported that there were at least 30 government officials at the site within minutes yet the publicity of the incident was almost non existent. Despite the fact that we know that there were a few articles written, a search on TROVE (historical online newspapers) shows absolutely no results regarding the 1966 Westall UFO. That in itself is quite odd. 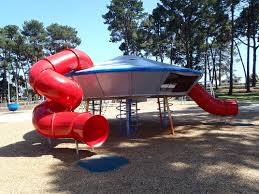 Today you can visit the site of the reported landing in Westall. The area off Osbourne road is now a public park called The Grange Reserve. And in a wonderful quirky twist there is a beautiful new playground that embraces the UFO sighting, complete with spaceships and alien wobble boards.