Gembrook and the Hills 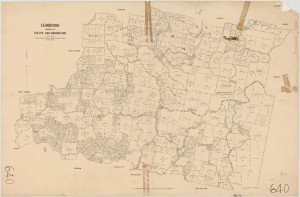 1892 Map of Emerald, Gembrook, Upper Pakenham and Northern Part of Upper Beaconsfield. map Courtesy of The State Library of Victoria.

In the late 1800’s the dividing line between Emerald, Avonsleigh, Macclesfield, Nangana and Gembrook is difficult to pinpoint. The “Emerald Diggings” were actually in the Avonsleigh/Macclesfield area. These same diggings were also referred to as the “The Gembrook Diggings”.  Cockatoo was often referred to as Cockatoo Creek and Pakenham Upper as Gembrook South and Mount Burnett as Gembrook West. Even today if you have a look at Google maps for the Upper Pakenham area you will see that Gembrook South shows up south of Pakenham Upper. In many instances the entire area is referred to as Gembrook as it fell within the parish of Gembrook. 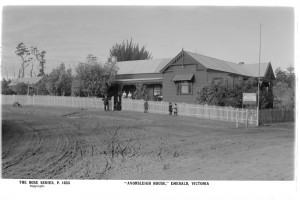 The township of Avonsleigh was named after this beautiful guest house. Photo courtesy of The State Library of Victoria.

The search for gold opened up large areas of the Australian bush for farming and settlement. With gold came the walking tracks of the gold seekers and the clearing of timber for their huts and cooking. In 1866 Janet Bowman, owner of Bowman’s Hotel  (known today as the Central Hotel) in Beaconsfield, paid two men to cut a track from Beaconsfield to Warburton to meet up with a trail to the Jordan Goldfields. This track ensured that the miners would travel past her hotel and made it easier for diggers to reach areas like Gembrook. What they found around Gembrook was a small amount of gold but also sapphires and rubies in in the creek bed. Sadly these were not of  “gem” quality.  The big find was of a significant amount of tin around a creek in Beenak. Janet and her son formed a company and became involved in the management of the Sir William Wallace tin mine.

The earliest mention I can find calling the area Gembrook was in the Argus newspaper dated March 30, 1874, when a government auction offered land for sale in the parish of Gembrook approximately 7 miles north of Pakenham. In the following years many other holdings were put up for auction with an average upset (lowest) price of £1 per acre.

The people of the hills area had to fight for facilities and services. Roads and transport were their major complaints but doctors and schools were mentioned regularly. By the mid 1870s the dubious Victorian Acclimatisation Society had land in Gembrook that was being used to breed animals and plants imported from around the world in preparation to their being let loose in the Australian bush.

Gold was again on the menu when large finds were reported in 1892 and 1893. Disaster occurred when a miner named Dick Hinton was buried alive in a mine land slip in October of 1893. Gold resurfaces regularly with finds being mentioned in 1906 and 1908.

The timber getters were hard at work through the 1890s and up until the late 1940s. The little Puffing Billy railway was used to cart much of the timber out to Melbourne markets but the lack of crane facilities hampered the industry. In 1953, the line was damaged by a land slip and the Victorian Railways Commission decided to close down the narrow gauge rail line.  This was a blow to the little community. Today Puffing Billy is a major tourist attraction and is manned by a wonderful group of dedicated volunteers. 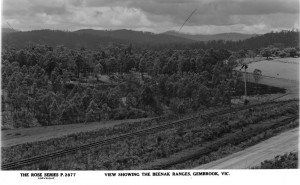 View from the Puffing Billy Line towards the North East Beenak Ranges. Photo from the Rose Stereograph Series courtesy of The State Library of Victoria.

By the early 1900’s it was obvious that the fertile red soil of the hills was perfect for growing fruit and vegetables. Raspberries, potatoes, apples, carrots and onions were all grown on the hillsides from Emerald to Gembrook. The area was also home to some more alternative projects such as the production of charcoal for automobiles produced at Kurth Kiln during the Second World War.

Our little hills towns have gone through many changes during the last 140 years but some of the families who call the area home have remained for generations. There have been triumphs and tragedies but this beautiful area has also had a number of characters- including a couple of little dogs with big personalities.

If you have travelled on Puffing Billy in the last few years you would have seen a grave marker near Cockatoo for a very special little pooch named Jerry. In the 1930's, this little black and white dog took it upon himself to be the mascot of the Gembrook train line. A little stray who was unloved and unwanted he took his destiny in his own paws and taught the train travellers of the hills to love him. Eighty years on and the people of the Gembrook area still talk about this special little dog.
Read More...

In 1885 on a freezing midwinter's day two men found a naked and starving girl near Yellingbo. Read on to find out how she ended up lost in the bush.
Read More...

The Kelly Gang in Gembrook

Two respectable local women are not quite what they seem.
Read More...

An Adventurous traveler, Mrs. Frederick Weston, 68 of Avonsleigh, Victoria, an old age pensioner, regularly hiked around the country. Mrs. Weston, who was a grandmother carried a small suitcase on the journeys and wore her best black frock.
Read More...

I think what stands out about this report is that it was so graphic, yet so short.
Read More...

One of the original landholders in Gembrook, the Acclimatisation Society of Victoria was a group of men dedicated to introducing pest species into the Australian bush.
Read More...

Man's best friend can also be his saviour. Bert Barnett was saved from death by a special little dog, unfortunately the dog wasn't around when he needed him, 36 years later.
Read More...