Oh how I wish I could give you an explanation as to where the Haunted Gully name came from. I have searched and searched but all I can give you are theories.

In 1872 a gold mining lease was taken out on an area between Beaconsfield, Officer and Upper Beaconsfield. The land comprised of a very steep gully that ran north/south between what is now Dicky and O’Neil Roads. This mining lease gave the name of the area as Haunted Gully and it seems to be the first time that this name is used in any public sense.

The first known exploration by white settlers was in the early 1860’s when Janet Bowman of the Gippsland Hotel (now known as the Central Hotel) in Beaconsfield, paid two men to cut a track to the Jordan Goldfields above Walhala. This track opened up a large swathe of land from Beaconsfield to Launching Place. By 1867 a Mr. C. Wisehart was searching for gold in the region and in 1872 he took up a lease on the land. The lease was disputed as he was attempting to secure 30 acres under his name. The Minister of Mines stepped in and the lease was granted for 10 acres.  During the court case it was stated that Mr. Wisehart or men in his employ had been mining this area for two years. My first theory as to the name is rather simple- Wisehart was attempting to put off other prospective miners by giving the area a name which he felt would discourage lonely miners from camping in the isolated gully.

This gully was very steep. The descriptions talk of the huts and tents perched on cuts into the sides of the gully.  Originally it was thought that the gold was alluvial (on top of the ground) but by 1872 a man named Valentine was busy digging a shaft. Mr Wisehart’s claim was near the top of the gully and extended down about half a kilometer towards Beaconsfield. A dam was built on Wisehart’s land with a water race and a puddling area. A second dam was built at the bottom reaches of the gully and a timber tramline was in place to take the paydirt down. A general store was built of logs along with a residence for a Mr. Bell.

Calling the area “haunted” seems rather strange. Scarcely ten years had passed since the area had been “discovered” by white settlers, surely not enough time to secure a white man’s ghost. On the other hand, it makes more sense for it to be thought to be haunted by the local indigenous land holders but I find that there is a conspicuous lack of information about them. Many of the Westernport tribes were removed from their lands and placed at the Aboriginal Protectorate Station, (later know as the Police Paddocks) Dandenong. This started in 1837 and by the 1860’s European diseases had taken their toll and there is very little reference to the native population in any local publication. Combine this with the fact that this gully was isolated, the closest local settlement was at Beaconsfield and if information about the gully was to filter through to the white population there would have been a need for both to visit the area together.

Another theory I have is that Ninox Connivens was in residence. This is an owl with some very  remarkable calls. Sometimes called a Murdering Woman Owl, it can make a sound like a high pitched  “heeeelp, heelp, heelp”. This same owl is also called the Barking Owl due to another of it’s calls which sounds like a dog with it’s “wuff, wuff, wuff'” calls.

Although there was never a major gold strike it seems that the area supported miners for many years. At it’s height in the 1870’s there were about 100 miners working the diggings. By 1893 the number had dwindled to just a few including an elderly man living as a hermit with his little dog in the fern gullies. By 1894 this changed again as a group of Chinese diggers settled down to work the gullies. In 1895 it was reported that 51 oz of gold was cashed and that the gold came from the Haunted Gully Diggings. Taking into account inflation and today’s price on gold that would equate to roughly 7 million dollars. There were other gullies also being mined and producing payable gold in the local area. Just to the north-west (alongside Telegraph road) was Welcome Gully.  Mayfield’s was to the north-east between Armstrong road, Salisbury road and Carpenter roads. Bain’s Gully was below St. Georges road in the vicinity of Critchley Parker Junior Reserve, and Walker’s Gully ran between Knapton ave. and the Cardinia Creek.

FROM MINE SHAFTS TO WATER RESERVOIR

In 1916 it was announced that a water supply system would be built to provide a reliable water source to the naval base at Hastings and towns on the Mornington Peninsula. This supply would come from the headwaters of the Bunyip river and travel along a water race and pipeline to Haunted Gully where a water reservoir was being built. From Haunted Gully it would travel along pipelines to the peninsula.  This was an a massive task, taking water along open channels for 50 kilometers, building a storage basin and then another 50 kilometers of pipeline to move the water to Hastings.  The reason for the project is very clear when you understand that the world was in the grips of the first world war. Put in this context the engineering feat is so much more remarkable because Australia had a severe shortage of labour with many of the strong healthy men off fighting the war. 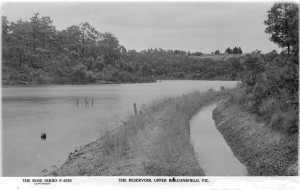 Photo from the Rose Stereograph series, courtesy of the State Library of Victoria.

At this point Haunted Gully was still producing gold although the quantity was quite reduced. The deep shafts and gully lent itself to producing a very deep water basin. There are some reports that state that the depth of the reservoir is up to 800 feet (248 meters). I find that highly unlikely but it is known that the miners were digging deep shafts and were using a blasting powder to expand on them. Although the surface area is only 40 acres (16 hectares), the capacity is 200,000,000 gallons (or 909,218,000 litres) of water. During it’s early days many locals and weekend tourists would go up to this beauty spot to have picnics or for day outings. Later it was fenced to make sure that this source of drinking water remained clean and pure. Today the reservoir remains and this beautiful spot is now under the control of the Cardinia Environment Coalition.

The Body on the Road

A miner's body is found on the Emerald road in Upper Beaconsfield.
Read More...

A miner has a few issues with a stray cow on the Haunted Gully diggings.
Read More...