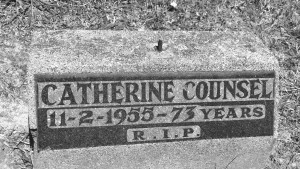 Miss Catherine Mary Counsel was a tiny, sweet natured and deeply religious woman who spent most of her life as a housekeeper for wealthy families in and around Melbourne. Known as Kitty by her friends, her life was inconspicuous, she is never mentioned in newspapers, difficult to find in electoral rolls and barely rates a mention in death notices. Her life may have not have been noteworthy but it was the bizarre happenings after her death that caused me to research this diminutive  lady.

Little Kitty came from a well respected family.* Although of Irish stock her grandfather, Loughlin Counsel was a surveyor and civil engineer in Southampton. His father and siblings had emigrated to Australia in the early 1800s, settling mainly in Tasmania but Loughlin and his family but didn’t arrive until the mid 1850’s. Kitty’s cousin was Edward Albert Counsel who became a surveyor, civil engineer and administrator in the Apple Isle.

Kitty’s father, Edward Counsel, was difficult to track at first, but eventually I discovered that he was a writer and musician. In 1875 at the age of 42, he married a relation of his stepsister’s, a musician by the name of Mary Josephine Gannon at Ballarat. In 1880 they had their first child, Edward Loughlin who sadly died at 4 months old. In 1882 they were graced with their second and only child to reach maturity, Kitty. 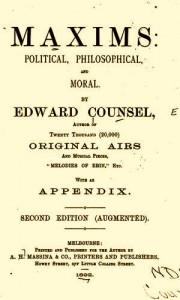 Today, Edward is considered a philosophical genius and his book which he published in 1889 called, Maxims: Political, Philosophical and Moral is considered a masterpiece. Some of his famous quotes include: “We live as we die, and die as we live”, “Reason often overturns experience” and “Success is a hidden jewel, and is found but by a few.” With his wife Mary, he also wrote numerous musical scores, including The Melodies of Erin. Although brilliant, his work was never fully recognised during his lifetime and it seems that his daughter never received any royalties or payment during her lifetime.

Edward’s father (Kitty’s grandfather) was Loughlin Counsel who had extensive land holdings in the Somerville area of the Mornington Peninsula. Loughlin passed away in 1875 and left more than 1000 acres to his children and stepchildren. Edward was the beneficiary of 213 acres plus a large number of shares in The Colonial Bank of Australasia. After Edward and Mary’s wedding, they moved to Somerville and it was there that little Kitty was born. When Kitty was 12 years old her mother died and Edward seemed to become unhinged, writing rambling letters to local councils and newspapers. Shortly afterwards he simply stopped writing altogether. Edward passed away in 1909 in Somerville and his death was barely noted in the newspapers. I can’t find a will for Edward so I have no idea what became of his land or property but by 1909 Kitty was working as a housekeeper in Surrey Hills. 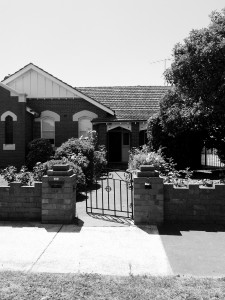 From this moment on, Kitty’s life was one of predictability. She worked as a housekeeper in Surrey Hills until 1924. In 1931 she is on the electoral roll in Kew and her occupation is listed as household duties. In 1949 she was working for a family in the Hampton/ Brighton area. In 1954, she was housekeeping for a young parish priest by the name of Father Daly at Orbost in eastern Victoria. In 1955 when Father Daly was transferred to Trafalgar, Kitty went with him. In February of 1955, at the age of 73, she was admitted to the West Gippsland Hospital in Warragul having suffered a stroke. A few days later she died and was buried at the Trafalgar Cemetery.

It was after Kitty’s death that her story becomes rather strange. On the 26th of March, a  Maltese migrant by the name of Joe Sammut discovered a partially buried body while out rabbit hunting near the brown coal mine at Yallourn. Unsure of whether it was animal or human he returned later in the day to re-examine the site. In an even odder twist to this story, during those few hours that Joe was away, someone attempted to rebury the corpse.  When the police arrived they discovered the body of an elderly woman whose hands were bound together with hospital bandages. 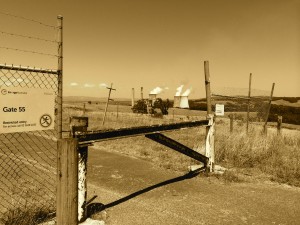 The remains were transferred to the morgue and a worker recognised that the bandages were applied in exactly the same way that the Warragul Hospital used when laying out a body for burial. This gave the detectives their first clue as to the identity. Using this knowledge they became convinced that the body was not that of a murdered woman but rather that of a person who had been recently buried.

Files of elderly women who had died at the West Gippsland Hospital, Warragul were searched. It was reported that the detectives were looking for suspect with a religious “bent” although why this was so was never explained. About this same time a letter was sent from Warragul to D24 in Melbourne which read “There is no murder at Yallourn. Open grave Trafalgar Cemetery of Christina Council. Coffin is empty. I wanted her bones sorry.” The words were printed on two envelopes, one inside the other. Although her name was misspelled and incorrect, the detectives opened Kitty’s grave and found that the lid of the coffin had been unscrewed and the casket was empty.

In the coming months, detectives were unable to find any leads as to the identity of the grave robber. It was determined that the coffin had been opened within days of her burial but why, is something we will never know. I have done extensive searches looking for similar crimes, or for people from the area who might have had mental issues around the time of Kitty’s death with no success. It seems that whoever robbed Kitty’s grave did not reoffend or if he did, those bodies were never found.

* disclaimer. I am convinced that Kitty was the daughter of Edward and Mary Counsel, despite the fact that cemetery records state her parent’s names as Francis and Ann Counsel.  These same records give an incorrect gravesite number at the Trafalgar Cemetery yet list her full name as Catherine Mary Counsel. I have searched records world wide and cannot find a marriage for a Francis and Ann Counsel during the 1870 – 1880’s, nor can I find a birth record for a Catherine Mary Counsel, child of Frances and Ann. The date of Kitty’s death, (1955) minus her age (73 years) gives us the exact same birth year as Catherine Mary (child of Edward and Mary). At the time of her death she had no close living relatives and I believe that whoever supplied the information to the cemetery was mistaken.