This article appeared in The Argus (Melbourne) on Saturday the 26th of May, 1900. 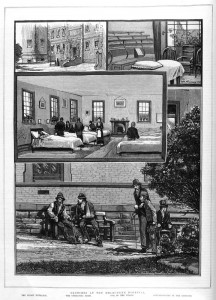 The Melbourne Hospital 1881. Photo courtesy of The State Library of Victoria

A young man was brought to the Melbourne Hospital yesterday from Narre Warren, where he had been found standing in a cataleptic trance on Thursday afternoon. He was taken to Berwick and as he did not recover after a night’s rest it was decided to send him to the city for medical treatment. It was at first thought that his name was William Wright owing to a receipt in that name which was found in his pocket, but such is apparently not the case.

At a late hour last night, the sufferer partially recovered consciousness, and on being questioned by Hospital officials stated that his name was Mark Brooks, and that he was employed at a livery stable at Newmarket. They were unable to obtain any further facts regarding the man, and when questioned as to how he came to be at Narre Warren he seemed at a loss to comprehend their meaning.”

Catalepsy is a rare condition that causes a trance like state. The body posture and muscles become rigid, the breathing slows and there is a reduced reaction to pain. In the Narre Warren case, the man had entered the shop, asked for some biscuits and horse feed then walked to a corner of the store and stood there for an hour.

I felt that this incident was unusual enough to be included in Odd History but in researching I found a number of other cases in Australia around the same time.

The following article appeared in the Argus on Tuesday April 10, 1900.

The mysterious Japanese who was found standing in Swanston Street in an unconscious condition on Sunday night, lies in the ward of the Melbourne Hospital in the same state. Inquiries made by the police show that the man was seen standing at the spot where he was found as early as Sunday afternoon, and must have been in the same position for at least eight hours.

Mr. Amess, M.B., the medical superintendent of the Melbourne Hospital, says that the case is a most mysterious one, and, though resembling catalepsy in many respects, the stiffened muscles, which are invariable in that disease, are not found in the case of the Japanese. His limbs move freely and fall limply when lifted and although it is considered impossible that he is malingering, he occasionally gives indication of some will-power. He swallowed some nourishing broth in a mechanical way, and on one occasion even sat up in his bed, but he, nevertheless, appears perfectly oblivious to his surroundings.

Until this case was reported the medical men of the colony had met with nothing of the sort. In America, however, several instances of this living death have attracted attention at different times, one young girl having existed in a state of coma for 15 months before she suddenly awakened.”

And yet another case was reported in the Morning Bulletin (Rockhampton) on Friday the 7th of October, 1900.

A peculiar incident is reported from Singleton. The police there were informed that a man named Robert Dunn, who had been employed near Singleton, had been found dead in a hut by a man named Martin. A coffin was sent to the hut and the coroner went out to hold an inquest. On his arrival the supposed dead man was found alive and well. It is thought he had been in a state of catalepsy as he was quite cold and stiff when seen by Martin. Dunn states that he had been affected by numbness of his hands and wrists for several days.”