The Murder of Our Female Recluse

Photo of the Ruins of Kate Glover Seul’s House. Taken from the Truth Newspaper (Sydney) 28/12/1952

In the early 1900’s it was very difficult to be born of what was called “mixed parentage”. Kate Glover Seul’s father was an English missionary and some documents show that her mother was part Indian. Kate was born in India and this unusual upbringing may help to explain the difficulties that this little girl had finding her place in the world between races and cultures It also may explain some of her unusual choices in life. Her life is difficult to trace as she was always a very private person but by following census forms, electoral rolls and marriage forms we can get an idea of her movements. In 1910, she was 31 years old, living in Washington state in America and on her third marriage to a much older German man by the name of Phillipp Seul or Saul. Although she seems to have 3 living children, only her youngest, Chester, is living with her. I have not been able to locate the other children. By 1914, Kate had moved to Australia and was living in Kyabram, Victoria and there are a number of Glovers (possible relations) living nearby. Her son Chester would have been 4 or 5 years old. Phillipp is appears to have arrived some time after her but is not listed on the electoral roll until ten years later, when he and Kate have a house on the Berwick Road in Hallam. Another 7 years goes by and in 1931 (when she is 51 years old), the electoral roll shows her living on her own, having purchased a parcel of land in Peterson Road, Officer (North) and her occupation is listed as a flower maker. Phillipp was 71 years old and living with their son Chester in Traralgon. Phillipp died two years later at the age of 73 at the Mont Park Lunatic Asylum. In 1937 their son Chester was married, living in Oakleigh and working as a mechanic. Chester also uses the name of Christopher Saul and disappears for awhile, reappearing in 1954 in Queensland. 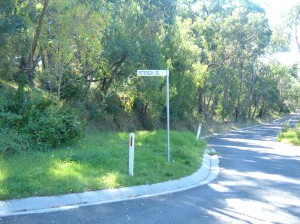 Kate remained on her own and slowly became reclusive. Locals that I have interviewed remember her as a lovely little, sweet natured and softly spoken woman. She was grandmotherly and caring. While in Officer she had very little contact with the outside world apart from walking the three kilometres down to the highway every fortnight to pick up her mail and supplies. She owned two parcels of land which she slowly sold off to neighbours which should have brought in a substantial amount of money yet her home was a ramshackle hut in the scrub comprising of three rooms and was made of bush saplings, old corrugated iron and bits of timber.  As Kate grew older, her self-imposed exile continued and her contact with the outside world lessened.

In the 1940’s she had befriended a military pensioner by the name of John Charles Wilson. Charlie Wilson was a local hawker who had been in the district for many years camping on crown land alongside the Toomuc Creek or roadside verges. Older locals today can still remember Charlie going door to door with his horse and covered wagon selling tinware, some of which he made himself. Kate sold him a part of her land and he lived there in a hut and his horse drawn wagon. Charlie had been seriously injured in WW1 and was also suffering from a form of Pagetts disease, a disease that causes pain and shrinking of the bones. According to locals, Kate looked after him and nursed him during his bouts of illness.

On the morning of Dec 8, 1952, neighbours heard shouting and yelling from the direction of Kate and Charlie’s huts. Later in the afternoon they heard a rifle shot then the crackling of a fire. They ran to Charlie’s hut but found Kate’s shack completely engulfed in flames. Charlie was standing in the doorway of his hut and the neighbours allege that he said “She’s dead. Isn’t it glorious?”  And later he said “She’s in there. She’s dead. You will find out about it in court. She’s dead and I’m going to the gallows.”

During the inquest Dr. J.W. Arundel was called. He had had occasion to visit Wilson in his hut in the months preceding the murder.  He stated that Wilson had a noose hanging from the rafters of his hut and he had told the doctor that he would hang himself because he could not live on the military pension. Dr. Arundel said that he felt uneasy in Wilson’s hut and believed that Wilson was not fully mentally capable.

Wilson made statements that his pain was so great that he needed to drink to stop the pain. He also said that he could not remember what had happened when he was drinking. He stated that he had had a number of glasses of wine on the morning of Kate’s death.

The crown alleged that she had been shot and then the room was doused in kero and set alight. The damage was so great to her body that they had trouble doing an autopsy. The crown prosecutor presented the court with a very small fragment of metal that was believed to be the remnants of the bullet.

Wilson pleaded not guilty to the murder of Kate Glover Seul. He claimed that he had not made the statements to his neighbours and that he did not know that Mrs. Seul’s house was on fire until he stepped outside his shack. On February 27, 1953 while giving evidence, Wilson was asked to strip to the waist. It was shown that his right arm was shrivelled and it was claimed that he could not have shot the rifle with any accuracy.

On February 28, 1953, John Charles Wilson was found innocent of both the murder and manslaughter of Kathleen Glover Seul. He was immediately released from custody and he disappeared from the district. Due to the fact that his name is so common, I have been unable to find any conclusive evidence of where or when he died.

Sweet little Kate was not all that she seemed. When she was 23 years old and living in Canada, she married James Henry Nelson. Then 6 years later, in January of 1908 she married Thomas Kirk and in Sept of 1909, she married Phillipp Seul aka Saul. She appears to have forgotten to divorce any of these men and they did not die until much later. She stated on each of her marriage certificates that she was a widow. In the 1930’s she also wrote a number of songs which she registered for copyright. I can find no explanation as to how she came by the money for her purchase of the land in Officer during the great depression. Her father died much earlier, none of the husbands died until after she purchased the land nor did she start writing the music until after she held the titles to her land. Even odder yet, newspaper reports state that this sweet little old lady slept with a machete and a rifle at the head of her bed and a knife under her pillow. These were supposedly leftover habits from years of living in the Canadian wilderness. Kate Glover Seul was an unusual woman, a tiny, soft voiced little lady who kept some big secrets.