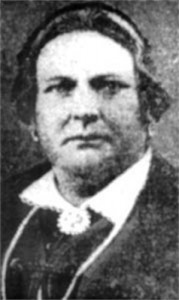 Agnes Buntine “The Mother of Gippsland”

In the time before motor cars, trucks or railways, goods were carted by packhorse and bullock teams. These teams of animals were managed by a rough little man called a bullocky. Bullockies were known for their strength, their stamina and their rather strong and colourful language. These tough men would drive a team of up to 30 castrated male cattle hitched to a dray or cart loaded with goods through rivers, marshes and over mountains. Training the cattle was an art in itself. The quietest of the bullocks would be chained together, then a heavy wooden yoke placed over their heads. Yoking the animals was hard and heavy work, as was the loading and unloading of the drays. Into this world stepped a young girl by the name of Agnes Buntine.

The settlement of Melbourne was scarcely 3 years old when Agnes Davidson and her family arrived from Scotland. A former neighbour of the Davidsons in Glasgow was a man by the name of Hugh Buntine. Hugh, his wife Mary and their five children had arrived in 1838 but within a short time Mary died of typhoid. It wasn’t long before the 36 year old Hugh remarried, this time to the eldest daughter of John Davidson, 17 year old Agnes.

Agnes was never shy of hard work. In Scotland she had worked as a dairymaid in Robbie Burns byre and so with Hugh, she established a dairy farm on the Merri Creek near her fathers market garden. Agnes was 7 months pregnant when stories of the rich land in Gippsland inspired them to take a whale boat to Port Albert. Within weeks she gave birth to their first son, aptly named Albert, in a small hut they had built at Alberton. The Buntines were some of the earliest settlers in the district and their son is believed to be the first white child born in Gippsland. Because of this Agnes became known as the White Mother of Gippsland or Mother Buntine.

In 1845, now with seven children in tow, the Buntines moved to Bruthen Station, where three years earlier one of the worst massacres of indigenous people in Victoria had occurred. It is not known whether Agnes and Hugh had a part in the massacre but it is believed that the men who hunted and killed hundreds of local aboriginals were from the Highland Brigade. With the Buntine’s Scottish ancestry and the fact that they took up a license on the land it is possible that they were involved.

The Buntines pastoral license was for 8000 acres on the Bruthen Creek between Yarram and Rosedale. Life wasn’t easy and Hugh set up a small pub called the Bush Inn to supplement their income. Agnes decided to add to their coffers in a more unconventional way for a wife and mother. She purchased a bullock team and started carting goods to the gold fields near Bendigo. And during this time she continued to have children. By 1855 she had given birth to 5 children, taking the numbers of their brood up to 10. While she traversed Victoria, Hugh stayed home and ran the pub, looked after the children and continued to farm.

Life was never quiet for the Buntines. In January of 1858, four members of an American Whale boat called “The Junior” mutinied near Merimbula killing the Captain and some of the crew. They escaped but were captured in Gippsland, one of them in Hugh Buntine’s hotel where he was working as a cook. They were taken to Sydney then sent back to the US in cages for trial. An interesting aside to this story is that the mutineers wrote a detailed confession in the ship’s logbook, thereby saving the lives of the rest of the crew. 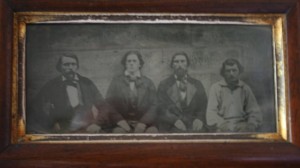 The mutineers of the whaling boat “Junior”. Photo courtesy of the Merimbula Old School Museum

By mid 1858 Hugh was 54 years old and not a well man. The Buntines gave up their license to Bruthen Creek and took one up closer to Traralgon at Flynns Creek. Agnes became the main breadwinner, using her bullock team and pack horses to move goods all across Victoria.

The art of driving a team of  bullocks is no mean feat. You had to have strength, stamina and courage and Agnes had all of these qualities. She took her  bullocks over mountain tracks that most men were scared to travel on foot. During her first Bendigo trip she was away for almost a year, setting up a small store on the goldfields to sell the goods that she had carried. When she arrived at Sandhurst (Bendigo), she killed and dressed one of her own bullocks for the miners to eat. One description of her trip talked about mountains so steep that some of the bullocks would be hanging by their yokes while the others found footholds.

Agnes was unconventional in many ways. She was a big woman who dressed rather eccentrically. Refusing to be hobbled by long gowns, she cut her skirts short and wore long leather leggings. On her feet were a pair of mens blucher boots and her top half was covered by a  large jumper with a hankerchief tied around her throat. She was also known for smoking an old black pug pipe. She was able to ride a horse like a stock rider, cut trees and split posts like a woodchopper and wield a stock whip like no other woman. In fact, in one story about her exploits it was said that she took her stock whip to a drunkard who was being offensive to a young lady and she “whipped him sober”.

Bullockies used a stockwhip like we would use a steering wheel. This whip had a long handle which gave him the distance to control the bullocks safely. The whip was twirled above the bullocky’s head, then using all of his strength, the driver would crack it on or near the animal he wished to turn. It was an art that needed strength and accuracy and Mother Buntine was an expert. Our Agnes was an incredible woman but not a saint. Certainly she did not suffer fools or laziness and while she took her whip to a drunkard she also was known to whip the local indigenous population. She also had a temper. There are a number of articles in the papers of the times referring to her dispute with a neighbour, her use of violent and threatening language and issues with an employee over wages. Despite this, she is curiously described as a kindly and generous woman. 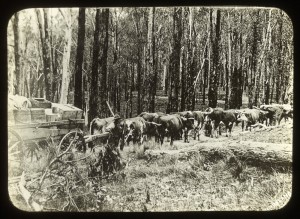 A typical bullock team in Gippsland. Photo courtesy of the State Library of Victoria.

In 1862 gold was found at Walhalla. If you have ever been to Walhalla, consider for a moment traversing those mountains before a road or even a track was established. Mother Buntine took the first load of goods into Walhalla with her packhorses and each step of the way she had to find footholds to lead the animals up and over the mountains. The gold found on the ground at Walhalla ran out very quickly but the deep lead gold was there for the miners to find. To work the leads the miners needed heavy equipment and Mother Buntine and her bullocks carried much of this equipment up the mountains. Two of her fellow bullockies were Peter Clement and Arthur Thompson, both of whom are mentioned in my article The Peculiar World of Margaret Clement.

Agnes’ expertise as a bullock driver was unparralled. In one newspaper article by a fellow bullocky after her death, he describes a trip where a driver of a team was accidentally shot. Mother Buntine bandaged the wound, lifted the injured man up on a horse and sent him off to find a doctor. Then she drove the two bullock teams to their required destination at once. This was a feat that was virtually unheard of.

Hugh carried on but his health continued to deteriorate. With his experiences in coping with his own health issues and the lack of any other doctor in the district, Hugh became the local medico. As time wore on he became known as Doctor Buntine and he provided an essential service to the population of Gippsland. In 1867 he passed away and was buried at the Rosedale Cemetery.

Agnes gave away her carting business but she still continued to surprise people. In 1873 at the age of 51 she married 29 year old Michael Hallett, a farmer from England. The couple continued to farm the Flynns Creek property until her son-in-law evicted them in 1880. A court case ensued and Agnes was reinstated but the marriage to Hallett suffered. In 1895 Agnes passed away at the Sale Hospital. In Agnes’s obituary it was mentioned that she had been presented to the Earl of Hopetoun and no less than four Governors of Victoria. It is also believed that the township of Agnes, near Welshpool and Agnes Falls were named after her.