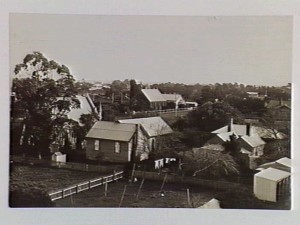 The Haunted Hills Township. Photo courtesy of the State Library of Victoria

Just to the east of Moe lies an area called the Haunted Hills. I have been under the mistaken impression that the hills were dug up to make way for the Yallourn open cut mine but just recently, when comparing a 1914 parish map with Google Earth, I found that the hills are still there. Certainly the open cut comes right up to the hills but the hills themselves lie outside the fence line. In the 1930’s an area on the eastern side of the hills became a settlement for workers at the Yallourn Coal Mine. It was this area that was removed causing my confusion. 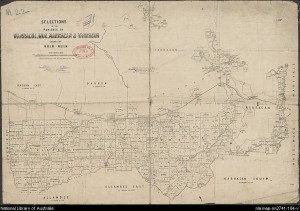 1914 with the Haunted Hills marked. Map courtesy of the State Library of Victoria

The first record I can find regarding use of the name was in 1866 during the discussion of a railway line being put through the area. After this, the name became commonplace and the hills were deemed “haunted”. Lying to the south of the main Gippsland road, the hills were steep, shadowed and tree clad until the 1950’s, adding to their air of mystery.

There are many theories as to why the area was considered “haunted”  and the most prevalent story is that cattle would stampede when driven through the hills. Throughout my investigation I do find that this is a recurring theme. It seems that up until recently cattle and livestock were not happy in the hills. Underneath this part of Gippsland is brown coal and it was thought that below the Haunted Hills was a coal seam that had burnt out leaving a large cavern which echoed when animals passed over the top. This is a very plausible explanation except that despite searching through geological surveys, maps and mining reports I can find no written evidence to back it up. There were many newspaper reports of cattle stampeding and breaking away over the years, so despite the cause, the Haunted Hills retained their name.

Throughout the early days of white settlement many people reported strange sounds emanating from the ground around the Haunted Hills. Some talked of low growling but more common were reports of thumping similar to hoofbeats. Prior to white settlement the local indigenous population avoided the area helping to fuel the reports of it’s being haunted.  There are also suggestions that underground streams would reverberate causing the eerie calls and that there was a “ghost’ herd which moved across the hills at night and it was their hoofbeats that could be heard. In 1951 a story appeared in The Argus which reported that a common legend was that of the ghostly stockman. He would appear both day and night and often on his horse as he searched for his phantom cattle.

In the 1930’s a number of articles appeared regarding the origin of the name. In 1885 bootleggers were arrested for running an illegal still in the area and one theory was that in trying to discourage visitors they fuelled the legend by moving through the cattle at night causing them to stampede. This theory was discounted by a local granddaughter of a cattle farmer who wrote “The owners of stills would surely invite, rather than avert discovery by causing the cattle to stampede. The drovers would naturally follow the beasts into the scrub to remuster them.”  Although I cannot come up with any other reports of bootleggers I have found an article written in 1921 describing the arrest of a man in the hills with a counterfeiting plant. It seems that he was still setting up his little enterprise and so I am reluctant to blame him for any cattle stampedes.

In 1915 a Mr. Horace Brinsmead was out trying to muster his cattle when he saw what he adamantly believed to be a lion in the Haunted Hills. In the report in the Melbourne Argus he stated that “he had a good look at the animal which was about 100 yards distant but could not force his horse any nearer”. He was quite positive that the animal he saw was a lion which disappeared into a belt of dense scrub. Mr Brinsmead added that “there are a number of dead sheep partly eaten in the vicinity”. A large party of men went out to hunt the animal but no sign of it was found. Two days later the Morwell advertiser printed an article which ridiculed Mr. Brinsmead’s sighting, comparing it to seeing Bunyips, dragons and unicorns. Then in March of 1916 a Mr. Thomas Keough reported seeing a lion nearby and in May of 1916 a Mr. H.Curtis reported seeing a deerhound that resembled a lion in the hills. Whatever it was, we will never know but even today there are reports of large cat like creatures in Gippsland.

The Haunted Hills was also the scene of many accidents, some of which seem slightly suspicious. In 1926 five people were injured when their car unexplainedly somersaulted. Shortly afterwards in another accident a car driven by Sir Neville Howse went into a skid and was wrecked on the road. In 1930, a truck overturned in the hills and in 1932 a man nearly missed death when his car’s steering failed on a straight stretch. In 1933 a truck overturned, in 1947 a Rev. McCormack and passengers sustained minor injuries when their vehicle was involved in an accident and in 1950 a car and truck collided on the hills. Accidents were not just confined to cars. In 1877 a young man was killed when a pile of sleepers he was sitting on fell from the train in the hills. In 1906 a young worker was hurt while working on the line and in a separate incident the tender of a train left the rails in an unexplained accident.

The strangest of all Haunted Hills stories revolves around a farmer and his wife by the name of Whitelaw. Set in and around the Haunted Hills it is one of the oddest mysteries ever to occur in Victoria. The Riddle of Two Skeletons leaves us wondering if the hills truly are haunted.