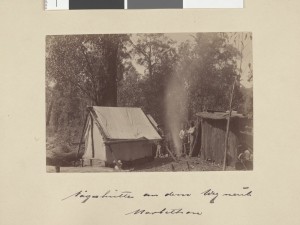 A typical miner’s home.
Photo courtesy of The State Library of Victoria

One of the gold miners on the Haunted Gully diggings was a man named George Christy. Some of the descriptions of these diggings describe the miner’s tents as being perched on shallow ledges along the steep sides of the gully. Mr. Christie’s tent was one of these and week after week he found that a stray cow had invaded his abode and tossed it’s contents. George would patiently climb the steep fern covered gully to retrieve his scattered possessions.

This article was reported in The South Bourke and Mornington Journal on Wednesday the 24 April 1895.“Surely the patience of Job would have been tried, had he returned to his tent as did our miner last Saturday, to find all his worldly goods again scattered far and wide and the tent itself a torn and scattered wreck of it’s former shapely self.

Among the debris was a quantity of gun powder, and it was while gathering this together that a spark from his lighted pipe caused a fearful explosion which blackened and burned one side of the poor man’s face, but fortunately and one might almost say miraculously did no further damage.”

Poor old Mr. Christy obviously gave up on his tent at this point and built himself a house. We know this because in 1899 there is a report in the South Bourke and Mornington Journal about his house being burgled. The burglar, a man named Martin Olson, took only two things- a pair of gardening scissors and The Tent. George was able to identify his tent by all the patches on the canvas.

Martin Olsen was tried and convicted and sentenced to 3 years imprisonment with hard labour.

Relevant The Cow and the Miner Links