In June of 1921 on a lonely bush track near Upper Beaconsfield an elderly couple were callously murdered in their small farmhouse.  Despite widespread searches and nationwide coverage the murderers were never caught and the mystery still remains as to who carried out this terrible deed.

Fred and Annie Sheard immigrated from Yorkshire in 1870.  In 1884 they purchased a 65 acre parcel of land on the southern side of Upper Beaconsfield in the vicinity of Quamby Road and proceeded to run a dairy.  The Sheards were hard working and thrifty.  They milked their cows by hand and planted a garden and a small orchard of fruit trees.  This was in the days before electricity or running water and the exterior of the rough bush shack was made of slabs of hand hewn timber.  The couple worked hard and had saved enough to consider moving back to Yorkshire. They put the farm up for sale in 1920.  Then for some unknown reason they withdrew it from sale.

In 1921 Fred was 74 years old and Annie 71.  They still milked their cows but the weeds in their garden were taking over. They were well respected in the tight knit community of Upper Beaconsfield where their neighbors included doctors, politicians, orchardists and farmers.

It was a cold winter morning in 1921 when a neighbouring farm hand knocked on their door to pick up a billy of milk.  He was surprised that there was no answer but went away without investigating.  At 11 am Mrs. Barnes, a neighbour became concerned when she hadn’t seen the couple in their clearing.  She knocked on the door and then entered the sitting room.  The house was in disarray and the couple’s elderly dog, Laddie was howling mournfully. The bedroom door was bolted from the inside so she hurried away to get a neighbor Fred Warmbraun. Fred sent for the police after peering through the bedroom window and seeing blood on the bedroom floor. When Constable Lombard arrived the elderly dog growled and barked then flew at him. With difficulty he hunted the dog out then broke down the door to the bedroom. Inside he discovered the couple’s bloodied bodies and the scene of a struggle. The reports from the coroner state that they were killed by a heavy instrument such as a pick or iron bar. Four shotgun shells were found in the bed but these seem unrelated to the murder. Fred Sheard had tried to fight off the attacker and Annie’s body was found curled on the floor at the foot of the bed. The house had been ransacked but the motive for the ghastly murder did not appear to be robbery as a sum of money was left lying on the kitchen table.

As they waited for reinforcements to arrive, Constable Lombard asked the neighbors if anyone would take on the dog. As there was no one willing to look after the elderly animal he attempted to shoot it. Numerous people stated that his shot did not hit Laddie yet later the dog was found dead with a gunshot wound to the back of the head and a badly broken shoulder.

The police brought in black trackers from the Police Paddocks in Dandenong.  The trackers followed footprints on the far side of the road.  The tracks changed direction and entered thick scrub where they were lost. The neighbor told the police of a stranger in a yellow car asking for directions to the … house. She had assumed that he meant the Sheard’s and that the farm was up for sale again.  She gave directions and thought nothing more of it until the day after the murder.  The car and men were also seen at the Cardinia (Kardinia) Hotel.

Eventually the police identified a yellow car and two suspects with access to the vehicle.  Both men had a history with the police and there was a suggestion that one was a mate of Squizzy Taylor’s.  There was a difficulty though: when the neighbours were called in to identify the suspects, one neighbour said she did not recognize them while the publican identified only one of the two. The case was very slim and both suspects were acquitted.

A search was also made for the nephew of the Sheard’s who was living in Australia.  He was shown to be living near Swan Hill at the time and not involved in the murder.  There were also reports of a woman or a person in women’s clothing crossing the Sheard’s paddock about the time that the bodies were discovered. The police were unable to find any evidence of this. A half caste “Chinaman” in Trentham also made a report stating the names of two men who he claimed were involved in the murder.  The “Chinaman” was later proven to be suffering from delusions and was admitted to a lunatic asylum. 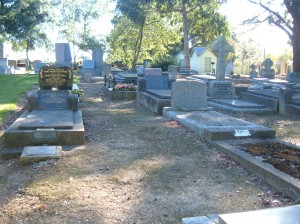 In 2012 the grave of Fred and Annie Sheard is still unmarked. It is my hope that we can arrange a marker for them.

On June 16, 1921, the friends and neighbours of Fred and Annie gathered in Berwick to farewell this hardworking elderly couple. The Sheards were interred at the Berwick cemetery in plot 4-111-B.

The following year the leading detective on this case was arrested for taking a bribe in an unrelated police investigation.

One question that does not seem to have been investigated is how the murderer shut a vicious cattledog in the outer room and how he or she left the bedroom, as the bedroom was closed and latched. To this day the perpetrator has never been caught and no motive for this murder was ever found.