The Eccentric Lady of Windsor 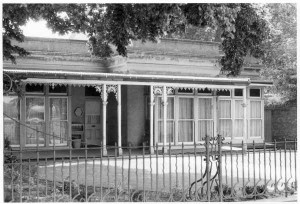 Maria Sarah Clare Mousley (nee Rudd) was a rather unique individual. She was described as an artist, an accomplished pianist and a drunkard. She was the eldest of four sisters and was born in Parramatta, NSW. By the time she was five years old, her family had moved to Cockermouth, Cumberland, England to the birthplace of her father, Arnoldus Rudd. Arnoldus had been apprenticed as a solicitor but for some reason didn’t finish his Articles of Clerkship before traveling to Australia.

Maria was a wealthy woman and I have spent untold hours trying to get a grasp on how she became so. When her father died in 1897 he left £800 to Maria’s two spinster sisters and nothing to Maria or her sister Elizabeth. During the search to find the source of the wealth it looked like the family simply disappeared from 1855 until 1877. Just recently, I discovered that one of her sisters was born in South America and I now assume that they lived there for a period of time.

In the 1870’s they returned to Melbourne and in 1877 Maria’s youngest sister Lizzy married Michael J. O’Farrell. Michael seemed to be “poor Irish” until I discovered that he was the brother of Sir Edward O’Farrell KCB, The Estate Commissioner of Ireland. Lizzy was the only sister to have children and it seems that Maria was quite close to them. Lizzy’s daughter Beryl became a well respected artist and she married into the family of Richard Davies Ireland, a brilliant criminal lawyer who provided the defense during the Eureka Stockade trials. Regardless let’s get back to Maria.

In 1888, Maria was 42 years old when she married Frank Mousley a metallurgist who was just 18. By 1904 Frank had left her “for a servant girl”. He returned for a short while before leaving her for good, setting up house in Artamon NSW. Shortly thereafter she became just a little bit odd.

She purchased a house at 171 Dandenong Road Windsor for £1100. This was a great deal of money and it included one acre of land with a second building in which she kept her cows. She loved her animals and in order to keep them warm she had a fireplace and mantle installed for the bovine beasts. She also made beds up for them and found it difficult to understand why they would not use them. In 1918 she tried to employ a cowman to look after her pets but became upset when he refused to share his bed with the beasts. In 1915 she woke a neighbor at 3 am offering him £50 to cure one of her animals and then when he told her it was dead, she refused to believe him.

After Frank left she started collecting pug dogs and kangaroo hounds. By the time she passed away she had 30 of them living inside the house with her. She also loved rats and refused to let anyone kill them and had disputes with her neighbors because they kept cats. By 1910 the council was involved and imposed a fine of £5 due to the deplorable state of the house and grounds. She was drinking heavily and providing hospitality to some of societies more undesirable types. Despite this she was described constantly as being very generous and kind. She often spent her days drinking at a neighborhood hotel before buying whiskey and beer by the carton and inviting all and sundry home with her.

On the 5th of February 1919, Maria’s body was found in her home by the police. It was estimated that she had died three days prior. She was 74 years old and the cause of death was questioned as the initial reports stated that half her body had been eaten by animals. Later it was proven that she died by alcohol induced disease and they stated that her body had been “gnawed on”  by either her dogs or the rats she tried to protect. Her fortune was valued at more than £8000 and included premises in Little Bourke Street, shares in the Bank of Australasia and in coal mines. although she had written a will, it appeared that she had torn it up during one of her binges. Her husband Frank (they never divorced) applied for letters of administration of the estate and a caveat was lodged by her niece and nephew.

A draft copy of the will was found by her solicitor in which she divided her estate into thirds. One third each to her niece and nephew and one third to her husband. If her husband predeceased her, his share was to go to any children he may have had with his mistress. Frank fought this and obtained a half share in her fortune with the other 50% being divided between her niece and nephew.

Maria’s two spinster sisters died in London leaving a fortune of more than £17,000. Her sister Lizzy predeceased her and in 1922, Maria’s niece, Beryl, moved to California with her husband William Richard Ireland. She went on to become a well known west coast painter. One of Beryl’s most notable artworks was inspired by her grandfather-in-law and represented the battle at the Eureka Stockade. 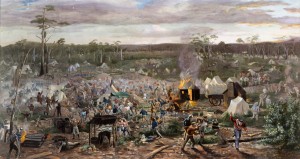