Silverton and The Remarkable Love Life of Beth Maynard

On a hot dusty day in February of 1890, a woman’s body was found beside an isolated track near a water dam called Rat Hole Tank, west of Silverton, NSW. It was estimated that she had been dead 13 days and that she died from malnutrition. This was not just any woman, this was Ann Elizabeth (Beth) Maynard, a lady who simply did not follow the rulebook and who had enough money to buy food for herself. We will never know the whole story of how she came to be there but it is my guess that it was Beth’s romantic nature that led her to that terrible death. 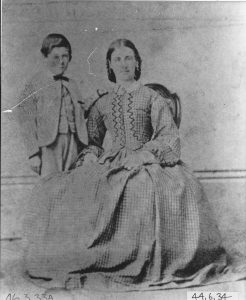 Ann Elizabeth Maynard Hoskin (Beth) and her son, William Joseph Hoskin about 1861. Photo courtesy of The Clare National Trust Museum, with grateful thanks to Val Tilbrook

Beth’s early life was very typical of a white middle class female in Australia in the 1800’s. Born in Chatham, Kent in 1838, her family emigrated to Australia when she was a young child. She was one of 11 children when the family took up land in the Clare region of South Australia. Her early life read textbook normal. At 34 years old she had a husband, a son, 59 acres of land and a few head of cattle. Her husband, William Hoskin was well respected, he worked as the local pound keeper in Rochester, SA, and then tragedy struck when a cart he was driving overturned and he was killed. Beth didn’t break down and fall apart. If you look at old newspaper reports you will see that in 1873 after William died, the pound keepers notices have Beth’s initials in front of the name Hoskin. She took over her husbands job. She was a resourceful woman.

Johnnie Lamb:  About a year before William’s accident, a man named Johnnie Lamb took a selection of 120 acres in the Rochester area. Beth obviously knew her neighbour because 14 months after William died she married him and within two months he took on the role of pound keeper.  At this point Beth was barely 35 years old. The marriage must not have been a happy because after 7 years of marriage Beth found herself in the Adelaide courts faced with divorce. Not a situation that the average middle-class hard working woman would normally deal with but Beth seemed to carry herself through with dignity and courage.

Now our Beth does not seem to suffer from any bad habits. I have to explain this. I have certainly looked. She is never brought before the courts for being a bit “tipsy” (and a lot of women are) or for using improper language or for being a “loose woman” for any other reason. Beth is a lady through and through. She just seems to go her own way. 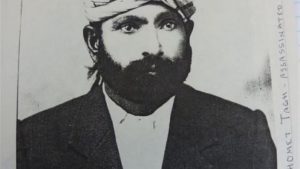 Tagh Mahomet: In 1885 at the age of 47, Beth really upset the apple cart when she married her third husband, an Afghan cameleer by the name of Tagh Mahomet. Tagh was the younger brother of a wealthy cargo and forwarding agent in the South Australian outback town of Marree called Faiz Mahomet and Faiz was related by marriage to the amir of Afghanistan. Tagh and Beth’s marriage didn’t last long. Suddenly Beth found herself on her own in the booming mining town of Silverton in the Broken Hill region and it was here that she reverted to her maiden name of Maynard. Later the brothers moved to Western Australia where business flourished on the goldfields. And then in a ghastly turn of events Beth’s ex husband, Tagh was murdered while at prayers in a mosque in Coolgardie.

The township of Silverton where Beth found herself is very remote. It is 23 kilometres north west of Broken Hill, 861 north west of Melbourne and 1171 north west of Sydney. Beth and the railway probably arrived about the same time. Prior to that, goods and services would have been transported by camels, pack, cart horses or bullocks or in many cases on a man’s back. The coming of the railway meant that the town of Silverton and shortly afterwards the town of Broken Hill grew dramatically into what we call boom towns. During the period that we are talking about, the 1890’s, Silverton had a population of 3000 people, quite a few more than the 90 people who reside there today. 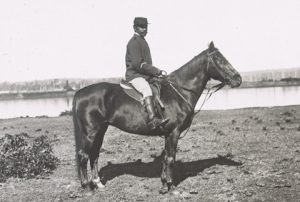 Aboriginal Tracker (Not Harry Daniels). Photo by GW Wilson, courtesy of the National Museum of Australia

Harry Daniels: By the time Beth died, she is described as the “paramour” or lover of black tracker, Harry Daniels. Harry is an interesting character in his own right. Despite some indiscretions, he seemed to be a well respected tracker and member of the Silverton community. I imagine the fact that Harry was so well liked was helpful to Beth and Harry’s relationship until Harry blew it by getting into a fight with another aboriginal tracker by the name of McDonald. He was immediately arrested, thrown in gaol and then remanded for eight days while a second magistrate was arranged. There was speculation later that Beth was distraught and thought that Harry would receive a sentence of 6 months. Instead he received only 6 hours but by then she had packed her bags and gone. As soon as Harry was released he followed. He was able to track her as far as the hotel at Umberumberka where she had picked up some food, but then she disappeared and Harry mistakenly believed that she had boarded a train for South Australia and headed back to her son in the Clare Valley. Harry tried the same route, looking for her much further south, along the border region in the Cockburn area. Unfortunately he was incorrect and his search was unsuccessful. It is obvious to us today that Beth would never have returned to her son. She had distanced herself from her family and although Harry was quite aware of her son’s existence it seems that according to family history her son had no idea of his mothers whereabouts. Beth was a proud woman. 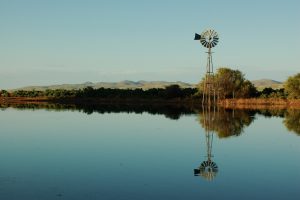 Rat hole Tank. Photo by and with thanks to Helen Murray of Silverton Photography.

13 days later Beth’s body was found just north of Rathole tank, a water dam less than 5 kilometres west of Silverton. Being close to the dam meant that she had plenty of drinking water, besides, during the inquest they didn’t find that she died of thirst. Beth still owned the farm her first husband left her valued at more than £500. She had a wealthy ex husband running camel trains in the area. (And by the way, she didn’t seem to take any money from her ex husbands.) I  am sure that she could purchase food if she chose to but I don’t think she chose to. She had no idea that Harry was out of gaol and looking for her and I think our Beth died of the one thing that money can’t fix, a broken heart. 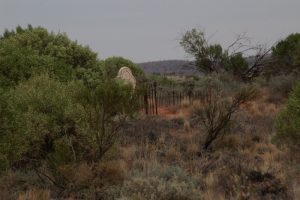 Silverton Cemetery. Beth’s body lies somewhere within these grounds in an unmarked grave along with the skeletal remains of other pioneers. Photo by Helen Murray, Silverton Photography.

Harry is an interesting character in his own right. Years later, the newspapers describe him as a remarkable weather forecaster and much later again it appears he became a middleweight boxer although I am having trouble proving this. In 1892, his reputation as a gentleman was reinforced as he attempted to stop a rape. He went on a bender just after Beth died but from then on he was never again arrested or put in gaol. He doesn’t appear to ever have another relationship, to marry or to have a family. You can only wonder at how that one simple argument, that fight, those 6 hours in prison and the loss of Beth must have affected the rest of his life.