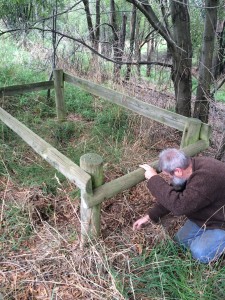 Most people driving on the Princes Highway east of Darnum have no knowledge of the area known as Dead Man’s Gully. The highway has been widened, the roadworks have made hills where none existed before but there is one small thing that alerts you to its history. It is a single grave, tucked down an embankment 1.7 kilometers from Darnum. This grave is what gave the area the name and in recent times, thanks to RTA workers, it is marked by the posts and rails around it.

Virtually unnoticed and tended for many years by an unknown person, it is thought that the grave has been there since 1877. It is believed that this is the final resting place of a man named John Molison, a railway worker who died while putting in a drive shaft on the original railway line in 1877.

Not much is known about Mr. Molison. His death barely rated a mention in the newspapers and his death certificate lists him as being 45 years old. I can’t find a birth record so he was either born overseas or working under an assumed name which was not that uncommon. For some reason after the inquest the constable took his remains back to near where he died and buried him there. This is unusual because by 1864, the cemetery act was in place making it illegal to bury a body anywhere other than in a graveyard.

John Molison worked for a company called Fishburn and Morton who were contracted by the state government to build 21 miles of the railway line linking Gippsland with Melbourne. Fishburn and Morton employed 900 men on this work and the death of John Molison was barely noticed and their track record of accidents was horrendous. In 1874 a man was hurt during blasting while working on the Ballarat to Maryborough line. In 1877 John was killed and two other men were seriously injured in separate accidents.  In 1881 and 1883 numerous men were injured or killed in incidents while working on the Mudgee railway line. The contractors might not have valued human life but they were given the contracts because of their ability to finish difficult jobs on or before time. They were also known to employ men who were not the savoriest of characters. At times the police would check the workforce looking for fugitives and known criminals, often arresting a few in the ranks.

The grave of John Molison gave rise to the name Dead Man’s Gully and whether it was because of the nature of the road and railway line or because of some other influence, the area became a notorious black spot for accidents and unusual behaviour. There are numerous deaths and injuries between 1889 and 1929, with most unable to determine a cause. The most disturbing article I have found is about three men who pretended to bury a body beside the road. The hoax was eventually discovered but I am sure that the young ladies who witnessed it were forever scarred.

So if you are travelling between Darnum and Yarragon spare a thought for John Molison. Take a bunch of flowers to put upon his grave and take a moment to think of the men who died while building our rail network.

Much of the information about this article was found in the book Lonely graves of the Gippsland goldfields and greater Gippsland by J. G. Rogers & Nelly Helyar.