Gippsland with it’s wet soils and swampy plains made road travel a nightmare and our early roads were often paved with corduroy. Not the type used to make trousers but logs of wood laid sideways across the tracks. The horses were kept at a gallop so imagine the jostling and pitching inside a carriage over the logs. The journey between Melbourne and Rosedale took 33 hours, stopping only to eat and change horses. As the logs perished more logs would be placed directly on top. In the 1950’s, when areas of the main Gippsland road were repaired, the workmen found up to 15 feet (5 metres) of corduroy. 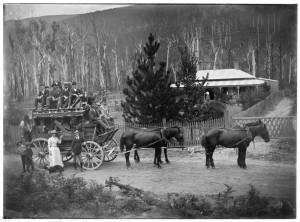 A typical Cobb and Co coach.

The following article was published in The Melbourne Argus on the 10th of March 1945.

“I TRIED TO GET A NAP to help pass away the dreary time, but with the jerking of the coach and the tumbling about of the luggage inside, and the splashing of dirt from the wheels, sleep was out of the question.”

So Thomas Mills wrote in his diary in the year 1873. It was Cobb and Co‘s Gippsland run and the 150 mile trip to Rosedale took nearly two days.Thomas Mills, an Englishman, was manager of Heyfield Station, owned by James Tyson. Perhaps because he was a newcomer to the colonies, he was more prejudiced against the rough tracks through the Australian forest that served for roads. But he became acclimatised without loss of time, for Harry Peck wrote of him: “When he arrived off the ship he was so green that when the boys put his saddle on back to front he tried to ride in it.” But Mills became a good manager and an excellent judge of stock.

At 1 o’clock on a fine September day he boarded the coach at the old Albion Hotel in Bourke st. The whip cracked and the horses set off at a good pace down the hill. Mills said people in the street “quizzed” them for the “reason that they had done the journey themselves and did not envy the travellers.

“Going at a good galloping speed through St Kilda soon opened up the country, and after an hour’s run brought us to the pretty little village called Oakleigh. Here we delivered mails and exchanged horses.

“At 5 o’clock we reached the small village of Dandenong. 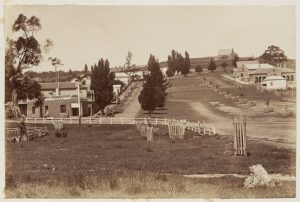 “We reached the next stage, Berwick, at 8 o’clock. The horses were changed, but no time was allowed for refreshments.

“Patience is a virtue – so I thought,as we pulled up at the longed for stage called Bunyip Creek. I was not long finding my way into the parlour of the comfortable inn, where a blazing log fire was burning to welcome weary travellers. The table was spread with a fine joint of beef and potatoes. We eagerly did justice to it, and followed it by  a good cup of tea. I drew up to the fire, prepared to have a warm, when the driver called, ‘All on board!’ so we had to go or be left behind.

“Later on, we passed the homeward bound coach on the road, and were warned by the driver that the roads were very bad indeed. We were not long in finding that out!, for the coach came to a sudden stop. The coachman jumped down, and when I heard him exclaim, ‘Here’s a bonnyfix!’ I jumped down, too. I landed up to my ankles in thick mud to find that a sapling had become tangled in the wheels of the coach. Axes were brought out, and after an hour’s work the wheels were free. Every mile the road got worse, and it was with great exertion on the part of the horses that we arrived at Brandy Creek.

“We changed horses, and, as a passenger left here, I took his seat on the box, thinking that the time and journey would not be so fatiguing.But in this I was disappointed.

“It was now 1 o’clock at night and very cold.

I WAS DELIGHTED when morning dawned, and felt better able to bear my troubles. The forest seemed full of life. Wild birds sang, cockatoos shrieked, there came the unearthly row of the laughing jackass and the scrambling of monkey bears.

“By 9 o’clock we reached the small village of Shady Creek, where there was just time for a warm.

“When we started I took an inside seat, as I could not keep my eyes open.I thought I might get a nap by sleeping on the mailbags, but it was quite impossible owing to loose boxes and parcels falling about.

“I became very sick, and was pleased when we pulled up at the village of Moe, and it was a source of great gratification to me when I became aware that the worst perils of our travels had been attained.

“My spirits began to revive, knowingthat in a few hours my troubles would cease. 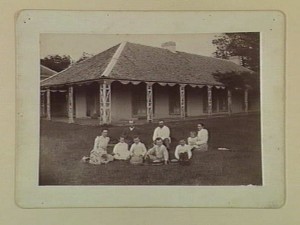 “At Traralgon village we had a few minutes refreshment, then made another start for the last stage for me. An hour’s run brought us to Rosedale, where horses were waiting to take us to our destination at Heyfield.

“The 33 hours in a stage coach across the Australian forest was quite enough to satisfy my ambitions in that direction.”

Word was sent through Rosedale post-office for horses to meet incoming travellers. Thomas Mills had a further ride of 12 miles before he could arrive at his destination. But food and warmth waited for him behind the sturdy stone walls of the old station on the banks of the Thompson River. It maintained the reputation of lavish hospitality of those days.