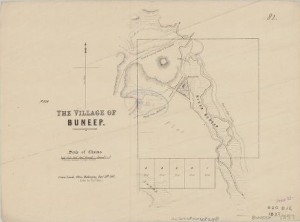 The first township of Bunyip was referred to as Buneep and was located between Ellis Road and the Bunyip River in North Bunyip. This position was essential as the lands further south were subjected to flooding making travel in the winter often impossible. If you look at Google maps today you can still see the small allotments which made up this first township. Just to the north of this village was a ford over the river and later a bridge. Between 1850 and 1870, the main Gippsland road passed straight through this small township, crossing the river and roughly following Middleton road towards Labertouche. The road then dropped down and headed towards Drouin West and the Robin Hood Inn. 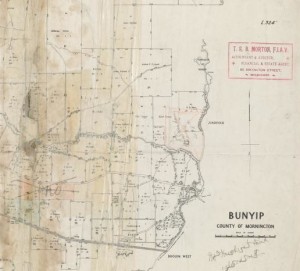 In 1867 a new road was cut to the south, generally following the old Princes Highway of today. A new hotel was built at the intersection of this new road and the Bunyip River and a small township grew alongside it. This “new” township was referred to as Bunyip with the old township referred to as Buneep. It was next to this new township that the Snell family of gigantic proportions lived. 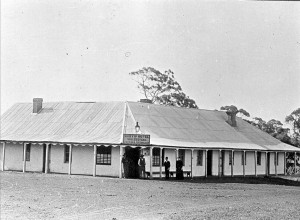 The “new” Bunyip Hotel located near the Prices Highway and the Bunyip River, 1890. Photo courtesy of Museum Victoria and copied from a photograph owned by S.Gerdtes

In 1862 a mention is made of a new track, taking only 4 days, to the Jordan Goldfields (above Walhalla) from Buneep. In 1863 a report about The Victorian Acclimatisation Society states that Dr. Mueller (The Victorian Government Botanist) says “The catching of the fallow deer at Richmond is nearly complete and the council is determined to liberate some of these animals at the Buneep”. There is also a mention from Philip Island about the good condition of the hares that had been released!

With the coming of the railway in 1877 the township moved again, this time to the present location and was also referred to as Bunyip with the area north of the highway generally referred to as North Bunyip. Slowly all remnants and remains of Buneep were burnt or eaten by whiteant and today there is almost no evidence of this little community nestled at the foot of the hills.

In 1885 a family of giants lived in Bunyip. Three of the Snell children were so large that they were exhibited as sideshow freaks with the blessing of their father.
Read More...