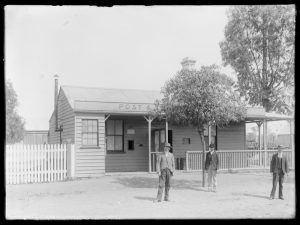 The Barmedman Post Office about 1900.        Image courtesy of the State Library of NSW.

This article was published in the Queanbeyan Age on Friday, 21 August, 1908 and shows a mother’s incredible devotion to her children.

A THRILLING adventure, happily unattended by serious results, occurred at Barmedman, on Tuesday afternoon. Whilst occupied with domestic duties, Mrs. Frank Raynor, who resides on the outskirts of the town; missed her little three-year-old son. Hearing screams and splashes, she realised he had fallen down the underground tank in the yard, and after placing a baby (12 months old) she was carrying, at the side of the well, she jumped to the rescue of her little son, By standing and holding the child above her head, the water being 5ft, deep, Mrs.Raynor was able to maintain him in a safe position until the other child, who had crawled to the door of the well, fell down also. The unfortunate mother, after tragic efforts, succeeded in reaching the second child. Some children, hearing screams, gave the alarm, and when eventually. found an hour afterwards Mrs. Raynor was holding both children above her head, with the water reaching almost to her neck, ready hands soon effected a rescue, but only in the nick of time. Mrs. Raynor, after realising the safety of her two children, collapsed into a state of semi-consciousness. No serious results, other than severe shock, are anticipated. 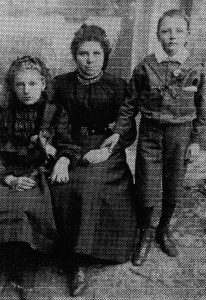 This heroic little mother was a 20 year old woman by the name of Christina Raynor (nee Collier). In the above photo, Christina does not appear to have been very tall which emphasises how difficult it was to keep the children above the water and what an ordeal she must have gone through.

Christina’s husband, Francis George Raynor was the blacksmith in the small town of Barmedman. Their 3 year old child, held aloft in the well for so long, was their son Francis and the little 12 month old was Edna. Edna married a man named MacIntyre and lived to the age of 76 before dying in Rosalie, Queensland. Little Francis went on to live a long and wonderful life and died at the age of 80. They survived because of a mothers incredible stamina, love and devotion.