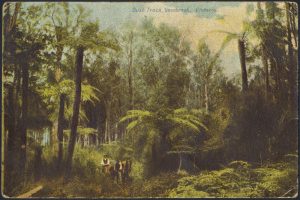 While researching this, I found that from 1905 – 1955 there were 16 other Australian articles about skeletons found in logs or trees. In some indigenous tribes the placement of the deceased in or on a tree is a natural burial custom but only two of these sixteen stories were about indigenous skeletons. We still have 14 cases where European skeletons were found in a trees.

This article was published on the 30th of June, 1911 in the Barier Miner. There are numerous articles in other papers about this story but this one gives more background information and also includes an interesting story of cattle duffing and escape from custody. Most of the articles use the word tree as the skeleton was found in the base of a burnt out upstanding dead tree. Please note that this article is also incorrect as it uses the name Robert Ellis whereas his full name was Charles Robert Ellis.

There are some peculiar circumstances connected with the discovery made in the ranges at the back of Tynong (wrote the Bunyip correspondent of the “Bendigo Advertiser” on June 23.) by a lad named Gaskett, a fortnight ago. While out rabbitting, he noticed something white shining in a hollow tree. On putting his hand in and pulling out the object he was horrified to find that it was a human skull.

On making investigations, Constable Watt, of Pakenham, found the body of a man who had been clothed in dark material, with two shirts, underpants and overcoat, with a pair of Balmoral boots (unworn) lying beside the pair of bluchers which had covered the feet of the man now dead. All the articles were in an advanced state of decay. A yale lock and a red and green enamel stud were also found. A dark stain, like blood, was found on an undershirt.

How the man met his death is a mystery that may never be solved, and who he is, or where he came from is likely to remain a matter of conjecture. The spot where the body was found is almost inaccessible, and is some miles from the nearest habitation.

If the man was lost in the bush it is not likely that he would carry a pair of boots, and an overcoat with him into a burnt out log to die. It is more than likely these would be the first things discarded. On the other hand, if he committed suicide, is it not likely that some traces of a weapon or poison (for if poison was taken, it must have been carried in some bottle, tin, or other identifiable object) would be discovered?

The matter is more mysterious owing to the fact that no suggestion of murder has been put forward. The only clue so far obtained by the police is the statement of a married woman residing at Brunswick, who states that her brother, a middle aged man, went to the ranges in the vicinity of where the skeleton was found, and has not been heard of.

When the discovery was first made many residents were inclined to the belief that the skeleton was that of a young man named Robert Ellis, who on May 6, 1909, escaped from custody in sensational circumstances, and was believed to be hiding in the ranges, with which he was most intimately acquainted.

On the day mentioned Robert Ellis and another man were committed for trial by the Healesville bench on a charge of having stolen 21 head of cattle and they were being conveyed by train to Melbourne by Constable Morey, a returned South African soldier. As the train neared Mont Albert the other man told the constable that he wished to go to the lavatory, and the constable took him, leaving Robert Ellis in the compartment, the door of which was locked. The train slowed up at Mont Albert and the prisoner who had been left decided it was an excellent chance to escape. He wrenched the bars off the window and climbing out, dropped upon the track, a free man. Constable Morey, returning with the other prisoner, found that Robert Charles Ellis had escaped and giving the other man into the custody of some civilians left the train to put the local police upon the trail and to telegraph the news to the Criminal Investigation Branch in Melbourne.

Those who know Robert Ellis intimately however, assert that he was too experienced a bushman to get lost and was ‘too shrewd to commit suicide’.”

One fact that this article did not touch on was that some of the cattle were stolen from Labertouche, an area very close to Tynong North. It is also interesting that Charles Robert’s father lived in the area during that same time. I need to point out that there was another family by the same name who were orchardists but who should not be confused with this one. After the brothers were arrested and prior to Charles Robert escaping, it was discovered that other mobs of cattle were missing in and around the Narbethong and Alexandra districts and the boys were in the process of also being charged with their theft. It seems that the cattle were usually taken from an “out paddock” or a paddock that was remote and not visited regularly, hence the delay in finding them missing and reporting them stolen. It is probable that after the disappearance of Charles Robert, more cattle were reported as missing but without anyone to charge, it was hardly worth a newspaper wasting print space on. In those days the loss of cattle could be devastating to a farmer. It meant the loss of his livelihood and there would have been quite a few people rather upset with Mr. Charles Robert Ellis. It is very possible that one of them even helped him into a final resting place in a tree. Although it was originally reported that James was not heavily involved, after the escape of his brother and the lack of Charles Robert to charge, he was convicted and received a two and a half year sentence. 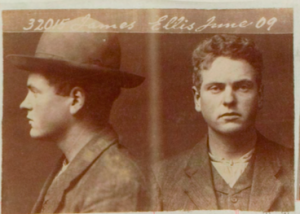 I have followed through with the theory that this was the skeleton of Charles Robert Ellis because of the comments made in the article.  If the man was lost in the bush it is not likely that he would carry a pair of boots, and an overcoat with him into a burnt out log to die. It is more than likely these would be the first things discarded. On the other hand, if he committed suicide, is it not likely that some traces of a weapon or poison (for if poison was taken, it must have been carried in some bottle, tin, or other identifiable object) would be discovered?”  There was also a dark stain like blood on the undershirt. It is also curious that the idea of murder was never followed up.

But back to the very odd situation of the many other skeletons found in trees. In 1899 a skeleton was found in a tree at Glen Wills, Victoria. In 1902, one was discovered near Yass. In 1905 one was found at Marrar NSW. In 1921, two were found, one at Wonoka Creek NSW and one at Ridley Tas., 1923 in Deloraine Tas., 1930 Barrine Qld., 1937 Capel W.A., 1940 Glamorgan Qld. 1943 was a big year, there was one found in Reservoir Vic., one in Pearl Beach N.S.W., and one at the Mont Park Psychiatric Facility in Vic. In 1951 one was found near Perth W.A. and in 1955 one was found at Thulimbah Qld. I could go on by listing the skeletons that were found in logs but I think you get the picture. We seem to have an odd habit of leaving skeletons just lying about in hollow logs or trees.

Relevant Skeleton in a Tree Links