One of the Cranbourne Meteorites being excavated, c 1850- 1860. Photo courtesy of the State Library of Victoria.

Between 200 and 1000 years ago, a meteorite shower rained down in a (roughly) straight line between Pearcedale and Pakenham. Thirteen pieces of meteorite material have been discovered, the first in 1853 in Devon Meadows and the last at a market garden in Clyde in 2008. These “rocks” are comprised predominately of iron and are incredibly heavy. The largest piece is at The National History Museum in London and weighs 3.5 tonnes (the weight of two Holden Commodores).These meteorites are the second largest ever found in Australian and are extremely important as a research tool for scientists who are looking to discover how our solar system formed. 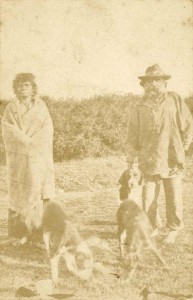 Eliza and Peter, the last of the Westernport Tribe.

In 1858 Cranbourne Meteorite #1 was sent to the British Museum. In 1862 Cranbourne Meteorite #2 was discovered on land in Clyde owned by the Lineham family. The British Museum also purchased Cranbourne #2 for £300 but Australian scientists protested and #2 was returned and is now housed at the Melbourne Museum. In 2001, the Pakenham Gazette interviewed two of the great grand daughters of the Linehams, Glenda Tait and Jean Hermon.  In the interview the women remembered stories their grandmother Susanah Beazley (nee Lineham) told of the meteorite. Susanah said the meteorite was worshipped by the Aborigines who came to the property and that it was special to them and they cried when they saw it being taken away.  The photo above is courtesy of the State Library of Victoria and inscribed on the back: Eliza and Peter, the two last of the Westernport Tribe, died at Cranbourne / Bunurong Tribe.

Cranbourne meteorites #3, 4, 5, 7 and 8 were all discovered in the Devon Meadows area. In 1928, meteorite #6 was found near Pakenham, west of the Toomuc Creek.  Meteorite #9 was found near the railway line between Officer and Beaconsfield. Numbers 10, 11 and 12 were found near Pearcedale and in 2008, number 13 was discovered on a market garden near Clyde. These “rocks” ranged in size between 23 and 3,550 kilograms and all were found in the soft soils of the Cranbourne region. With so many pieces found in a small area it is quite probable that there are others out there just waiting to be found.

The information contained in this article was (mainly) found on the wonderful local history website, Casey Cardinia- Links to our Past. I am indebted to the authors for providing such a well researched and informative website.