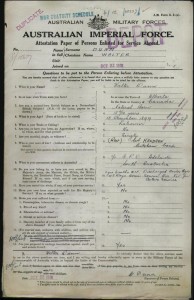 Army record for Walter Dunn, courtesy of The National Archives of Aus.

For many young men, the First World War was seen as a great adventure, it was a chance to see the world, to experience a life that was so different from their Australian upbringing. One of these young men was a boy called Walter Dunn. Walter was possibly our youngest Anzac with some reports stating his age as low as 13, but his birthdate varies quite a bit along with his place of birth and his next of kin. Suffice to say that Walter may have fudged the records in his bid to be involved.

The following article about Walter was published in the Bendigo Advertiser on Saturday the 8th of April 1916.

Walter Dunn, aged 14, otherwise known as “Charlie Chaplin,” stowed away with the 1st Canadian Contingent, staying with them at Salisbury and Shorncliffe in England and then smuggling himself with the contingent to France, where he had many adventures, including a compound fracture of the left arm. He saw several battles, and was in the fighting at Loos. When he heard there was an army at Salonika, he look the train to Marseilles, found troops embarking, stowed away, reached Salonika, and has now attached himself to an Army Service Corps camp. Dunn is a great favorite with everyone, and makes himself’ really useful. His father is an officer in Princess Patricia’s Light Infantry.”

I can find no record of his father so I presume that it was another little white lie. His story changed somewhat when it was reported in “The Argus” five months later.

Trip to Gallipoli and France.

There returned to Melbourne on Thursday a boy who tells a story of adventure more thrilling than fiction. His name is Walter Dunn, and he gives his age as 16 years and three months, although his diminutive stature would suggest that he was at least two years younger. He is temporarily residing at the Red Cross Rest Home, pending a decision by the military authorities as to what may be done with him.”

In this article, Dunn stated that he was born in Alberta, Canada, and was brought to Australia by his parents when he was five years of age. They lived at 135 Bourke street, his father worked on a farm outside East Melbourne, his mother died in 1912 with his father following in 1914.

Young Walter claimed that he travelled as a stowaway from Australia to Colombo and then made his way to Alexandria then Cairo. He joined the Light Horse camp at Giseh (Giza, Egypt), and, because the authorities were in a dilemma of what they should do with him, he was ultimately given an unofficial position as a bugler. Wanting to be included in all the action, he set off again, this time stowing away on a transport bound for Gallipoli. He declared he was present at the landing and assisted the Army Medical Corps in tending the wounded. Eventually he returned to Alexandria and concealed himself on a transport bound for Salonika. Finally, two and a half years after he first stowed away he was found by the military authorities who sent him back to Australia.

The article also said that “Dunn told his story without hesitation and appeared to have an intimate knowledge of the world in general. He stated that although he would like to go to the front again, he did not intend to run away from the military authorities in Melbourne. An Adelaide lady had promised to adopt him and if that could be arranged he would probably go to that city shortly.”

A further article appeared in the Sydney Mirror about a month after the end of hostilities. In this article Walter claimed he was only 13 when he tossed his lot in with the AIF. When looking at Walter’s war service record it stated that in 1916, he was discharged for being under aged. In 1918, Walter had rejoined the army and was at the Mitcham Camp in South Australia waiting to be deployed when the wonderful news came through that the war had ended. According to “official” records Walter had just reached the minimum age of 18, but his height was only 5 ft 1″ and his weight just 48 kilos. His AIF records also show that he still had the wanderlust. There were numerous days when he was absent without leave and his senior officer described his conduct as “bad”. I have no way of knowing whether he was ever adopted by the kind lady in Adelaide but he did put as his forwarding address a Mrs. Elsdon in Norwood (Adelaide).

Walter seems to simply disappear after 1918. I can’t find any official documents relating to him, he is not listed on any passenger lists or marriage or death certificates, and there is nothing further on his war service records. I can only image little Walter up above us somewhere trying to thumb a lift or stowaway on a rainbow. I only hope that he spent many more years hitching rides and seeing the world.