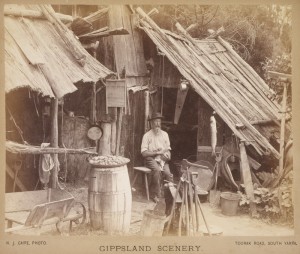 A Typical Selectors Hut in Gippsland. Photo Courtesy of The State Library of Victoria.

East of Melbourne and covering most of the lush south-eastern area of Victoria, is the region known as Gipplsand. Both Angus McMillan and Pawel Edmond Strzelecki are credited with the early exploration of the area but it was Strzelecki who coined the name Gippsland after the New South Wales Governor, George Gipps.

In 1841 the New South Wales governor employed Angus McMillan to find a route from the Monaro Plains (near Canberra) over the mountains to Omeo and down to Port Albert. This new route allowed farmers to send produce to the lucrative markets of Tasmania. This port and the nearby township of Tarraville became essential to the growth of Gippsland. When gold was discovered in Walhalla and Omeo, Port Albert became the busiest port in Victoria. Miners and supplies arrived by the same ships that were used to take the gold back to Melbourne.

Movement between the settlement at Port Phillip (Melbourne) and Gippsland was mainly by sea due to the difficulty in traversing the swamps and rivers of Gippsland. For the most part the roads and tracks hugged the higher ground above the KooWeeRup swamp but the track included the wet ground around Longwarry, Yarragon and Trafalgar. These areas became known as the “Glue Pots” due to the never-ending sticky mud that sucked at the feet of both man and beast. The Bunyip River was lots of fun too. There are numerous occasions where the bridge was washed away and horses were lost while trying to cross the swollen river. The coming of the railway in the late 1870’s finally gave the people of Gippsland an easy and quick way to send their fresh produce to the lucrative markets of Melbourne.

Gippsland is one of the most beautiful regions of Australia. With towering eucalypts, white sandy beaches and temperate rainforests it is a lovely place to visit, but I don’t think I would have wanted to be one of the first pioneers.

It is terrible to think of a human dying from exposure and starvation but it is almost more distressing when human misadventure causes the death of an innocent animal. This terrible scenario and subsequent death and mystery occurred in 1892 when John Sackfield disappeared in the Victorian High Country.
Read More...

Most people driving on the Princes Highway east of Darnum have no knowledge of the area known as Dead Man's Gully. The highway has been widened, the roadworks have made hills where none existed before but there is one small thing that alerts you to its history. It is a single grave, tucked down an embankment 1.7 kilometers from Darnum. This grave is what gave the area the name and in recent times, thanks to RTA workers, it is marked by the posts and rails around it.
Read More...

Miss Catherine Mary Counsel was a tiny, sweet natured and deeply religious woman who spent most of her life as a housekeeper for wealthy families in and around Melbourne. Her life was inconspicuous, she is never mentioned in newspapers, difficult to find in electoral rolls and barely rates a mention in death notices. Her life may have not have been noteworthy but the bizarre happenings after her death that caused me to research this diminutive lady.
Read More...

Agnes Buntine was one of Gippsland's earliest and more unusual settlers. She was a wife, a mother and a woman with an occupation that required strength and courage that many men of her time did not possess.
Read More...

Just to the east of Moe lies an area known as the Haunted Hills. The hills reputedly reverberate with odd sounds from low growling to mysterious hoofbeats and some unusual sightings including a ghost on horseback and a Gippsland lion (and not the football team sort). The area is also known for it's many accidents, some of which seem slightly suspicious and a rather odd murder in 1918.
Read More...

The Peculiar World of Margaret Clement

Margaret Clement and her sister Jeannie were dubbed "The Old Ladies of the Swamp" by the popular press in the 1950's. Their 14 room mansion in Tarwin Lower was falling down and the swamp had reclaimed the 2000 acres of prime farmland around the house. The women lived without running water, electricity or sewage. With no wood to light a fire, the sisters were living on cold tinned baked beans and bread. When Jeannie died in 1950 it became a massive job just to bring her body out for burial. Two years later, Margaret simply disappeared. It became a real life whodunnit that captured the attention of the world.
Read More...

On a frosty winter night in 1919 a strange discovery was made on the Korumburra train.
Read More...

These are three stories centered around buried treasure in the Inverloch area of South Gippsland. To date most of the treasure is still missing.
Read More...

The Attack at Desailly's Flats

The Riddle of Two Skeletons

Maria Whitelaw is found murdered near the Haunted Hills of Gippsland. Her husband disappears until not one- but two skeletons are found.
Read More...

For the last 100 years there have been reports of mysterious beasts throughout Gippsland.
Read More...