Mr. J.L. Toole and the Picnic 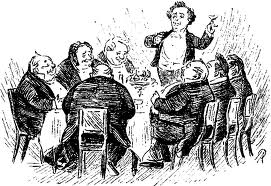 I apologize for this next story, but read through to the end – it’s worth it. The story was originally published in the Herald and republished on the 31st of May in The Adelaide Advertiser and on Tuesday June 3, 1890, in The Traralgon Record.

Mr. J.L. Toole was a well known English actor and comedian who toured Australia in the 1890’s. Aside from his wit and acting ability he was also known for his love of practical jokes and sense of humour. While he was in Melbourne he was the flavour of the month. Everyone wanted to boast that he had sat at their table. During the course of his tour of Victoria he was entertained by a group of traditional Aboriginal dancers. A week or so later, a group of Melbournites including two leading barristers suggested a trip out to the Dandenongs for a picnic. Mr. Toole agreed and a date was set. The two barristers were also known as practical jokers and they felt that a bit of “lively entertainment was called for” so they set out in the early hours of the morning to the place decided upon. Unfortunately this was Melbourne and it was a very cold and wet midwinters day. The two jokers removed their clothes and with the help of dark brown paint, proceeded to convert their lily white bodies to a colour more in line with a native Australian’s complexion. To complete the ensemble they donned a couple of laplaps. As the sun rose these two gentlemen shivered and waited. And waited. And waited. All day long. The picnic group had arrived at Flinders Street Station and recognizing the unsuitable weather had postponed the picnic and gone home. Regarding our barristers, the Traralgon Record reported “as evening approached they made their woeful way to the nearest township and presented themselves at the hotel. But the landlady would have none of them; she repulsed them with scorn and contumely, and when they endeavored to explain the situation they were promptly handed over to the police. Some dismal hours in the “logs” followed, but eventually a note to a friend obtained their release, and they managed to get home without further mishap.”