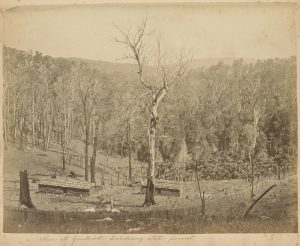 Gembrook about 1880. Fred Kruger photographer. Photo courtesy of The State Library of Victoria.

Take a group of eminent men, businessmen, agriculturists and horticulturalists put them in colonial Victoria and leave them to form a society worthy of their knowledge. This was the beginnings of The Zoological Society later known as The Acclimatisation Society of Victoria, a society dedicated to introducing pest species into the virgin Australian bush.

To many of our white settlers, the local bush environment was both frightening and inhospitable. Although kangaroo and wallaby was eaten, it was often a food of last resort. It was considered unpalatable compared to the “wild foods” of Europe.  The idea of introducing a familiar food that would “acclimatise” into the bushland environment was an idea that was believed would save settlers from starvation and help to develop large areas of what at that time was considered wasteland.  With this in mind, the ASV started work to breed, distribute and acclimatise European and non-indigenous flora and fauna into the Victorian bush. Today we understand the horrible repercussions of introducing these pests but in 1860, the members honestly believed that they were providing a great public service. The fact that one of the favourite pastimes of the Victorian upperclass was to hunt for these species must have made this project even more appealing. 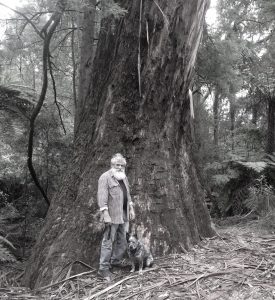 A remnant tree at Gembrook Park, site of the Acclimatisation Society.

One of the members of the society was Baron Ferdinand von Mueller, the government Botanist. With his help the Acclimatisation Society‘s first home was at the Botanic Gardens. Later they received an area in Royal Park where they set up the Zoological Gardens. In 1873 they also obtained a 600 Acre (259 hectare) parcel of land at Gembrook. Today a small portion of it remains as the Gembrook Park, just to the south of the township.

The Gembrook property was dedicated to breeding “game” birds such as pheasants and Californian quail. By 1875 it was increased to breed and distribute large flocks of European songbirds such as sparrows, thrush and blackbirds. In the 1880s the land was fenced and deer and hares were bred and released. Many of the members of the ASV were wealthy agriculturalists who possessed large country estates and these properties were put into play to breed animals such as goats and ostriches. Fish were bred at a number of locations and the brown trout we find in our streams are the offspring of those that were released by the society in the 1870s. The society was also responsible for the introduction of carp and all those blackberries lining the sides of our roads.

It wasn’t until the 1860’s when Janet Bowman paid two men to cut a track to the Jordan Goldfields (Woods Point area) that the land in Gembrook was selected by farmers. Bowman’s track opened up large areas of the Beaconsfield ranges including Upper Beaconsfield and Gembrook. By 1874 the Le Souef and the Ure families had taken up land in the vicinity. Albert Le Souef was a well educated and interesting gentleman who went on to become the secretary of the Acclimatisation Society and a driving force behind the Melbourne Zoological Gardens. He had selected 320 acres (130 hectares) of land on the Gembrook Road just about opposite Bessie Creek and Mt. Irene Roads. I would assume he was responsible for the grant of land in Gembrook to the ASV. Le Souef is also credited with naming the area after fossickers who had found small amounts of low quality emeralds, sapphires, garnets and topaz in the creek of which he named the Gem Brook. 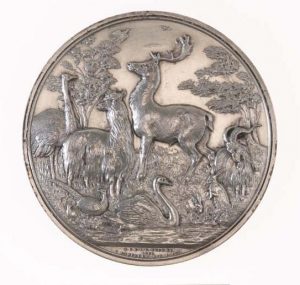 With hindsight, we can look back on the Acclimatisation Society and shake our heads but it is important to keep in mind that these men donated their time and their money to provide what they felt was a public service. Thankfully the ASV moved back into the area of zoological specimens and devoted their time to making the Melbourne Zoological Gardens a world class facility, but unfortunately their legacy of feral plants and animals continues to thrive in the Australian bush. Over 150 years later we are still suffering from an explosion of these pest species including deer in Victoria, foxes, rabbits, hares, blackberries and numerous other plants and animals. Sometimes the legacy we leave behind is not quite what we planned.