The Attack at Desailly’s Flats 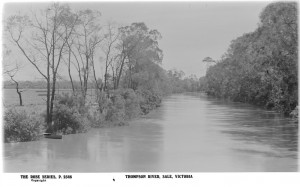 The Thompson River near Desailly’s Flats
Photo courtesy of The State Library of Victoria.

Desailly’s Flats is an area of rich river flats between the Thompson River and the Flooding Creek near Sale. The property at the centre of this dispute and murder was between Cunningham Street, The Princes Freeway and the Catholic College Playing Fields.

At 2 am on Saturday the 22nd of September in 1879, a young boy named John Conley rode his horse 2 kilometres through the darkness at breakneck speed to the police station in Sale. When he arrived he told police of a terrible assault that had occurred at a neighbouring property in Desailly’s Flats. A young girl, 18 year old Ellen Blood, the niece of the owners, had escaped and sought refuge at the Conley family home and shortly after, her aunt, Hanora (Ann) Jacobs was found maimed and bloodied on their doorstep. The family dragged her inside, before young John Conley took off on his mission of mercy. The perpetrator of the crime was nearby as he rode in the darkness. His tale of murder and violence  was so ghastly that I find it difficult to write.

When the police and doctor arrived at the Jacobs’ hut they found it in darkness and had to break the door down. Inside the floor was covered with blood and the furnishing destroyed. They found James Jacobs in his bed and he was unrecognizable.  His head was cut and bleeding, he had numerous stab wounds and his face was blackened from the effects of gunpowder. He had been bashed unconscious with the stock of the gun. He was just regaining sense when the doctor arrived. Remarkably the doctor found that he was not suffering life threatening injuries.

At the Conley farm they found Mrs. Hanora Jacobs. She had suffered two broken arms had been repeatedly bashed with the gun and her face, head and breast mutilated and covered with stab wounds. Her back and abdomen had been stabbed and slashed and her mouth down to her neck was cut open. The stabbing only stopped when the knife had broken but the blade was left in her breast. During the struggle the perpetrator had dragged Hanora by the broken arm and thrown her on the wood heap.  From there she had crawled the 400 yards to her neighbor’s house to safety.

The perpetrator of this horrendous crime seems to have been Hanora’s brother, Batt (John) Tobin. Batt was working for and rooming with the Laver’s family about a mile from the Jacobs’ selection. Before the crime he was sensible and calm. He had played a game of dominoes and drunk one warm beer. Batt’s character was considered mild and he had not shown any resentment to his relatives despite having been in litigation with them. He was a returned soldier who had been honorably discharged after serving 20 years and received two medals for distinguished conduct.

When Tobin was discharged from the army he was invited by his sister and brother-in-law to live with them in Sale. He took up a selection adjoining theirs at Desailly’s Flats. His brother in law, James Jacobs agreed to put up a house for him on the condition that he and Hanora would live in it until Tobin repaid the £200 building cost. About 8 months after the house was finished, a dispute occurred. As the crown lease was in Tobin’s name he forced the Jacobs’ out. Jacobs returned fire by suing Tobin for the cost of the house which he won with costs. Tobin didn’t have the money to pay so the property was put up for auction by the sheriff. On the Thursday, just prior to the attack, James and Hanora Jacobs purchased the same house and land for just £1.

The day after the assault, Batt Tobin’s dog was found running up and down a remote part of the Thompson River. Over a month later, on the 26th of October, the body of a man was found in the Thompson. Oddly, the hands had been tied together with a silk hankerchief. Despite this, an inquest found that the badly decomposed body was that of Batt Tobin and that he had committed suicide.

Nineteen years later, at the age of 81 years, James Jacobs passed away.  Hanora died in September of 1906, aged 84 years. Hanora’s niece, Ellen Blood who was present during the attack, went on to marry George Williams and to have a number of children.