Broken Hill, a Tale of Rainmakers, God and a Boating Tragedy 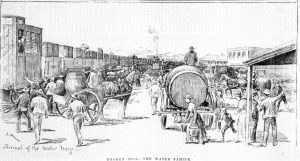 The Water Train at Broken Hill. Image Courtesy of The State Library of Victoria

In a town that had no lake, river or decent body of water comes a sad but wonderful tale of drought, rain and their first ever boating fatality.

It was the middle of 1903. Broken Hill had run out of water. There was no water for washing or drinking but even more seriously there was none for brewing beer. The small reserves were being used to supply the mining industry and as each train left the township it had more and more residents aboard. The stock exchange in town closed it’s doors and the Chamber of Commerce was panicking. That is, until they received a telegram from Dr. C. DeLacy McCarthy and his syndicate willing to lend a hand in the rain making department. For the small fee of £100 plus £500 upon the production of rain the good doctor and his equipment could be utilised to produce enough rain for the town and countryside.

In late June of 1903, the Chamber of Commerce, the water companies and the Government of New South Wales joined together to bring Dr. McCarthy, his five assistants and his equipment to Broken Hill on a special train. Although McCarthy was secretive about his process he did state that he “forces fumes into the air for a great distance which creates a vacuum in the fourth, fifth and sixth strata of air. The centre of a heat storm is thus formed and the cold air descends resulting in a heavy tropical rain. The secret of the chemicals was given him by a man in America. He had improved upon the system with the aid of a clever Japanese chemist. He changes his methods to suit varying conditions. It may require thirty-two hours of continuous work to achieve success.” 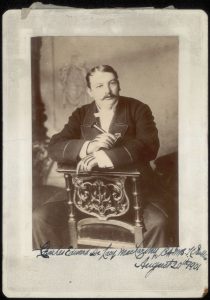 And so, on the 3rd of July, Dr. Charles Edward DeLacy McCarthy arrived in town. With his assistants he set up his equipment at three locations and started production of the chemical gasses supposed to bring down the heavens. There was a little problem though, and that was the small matter of rain. None fell. But Dr. McCarthy was not concerned, he stated that the clouds had gathered (of which they had) but atmospheric conditions were against them in the form of a severe frost which was forming a barrier to the rain. For the following 12 days and nights McCarthy and his entourage released copious  quantities of noxious gas into the atmosphere. During this time, he had visits from prospective investors who left without seeing any rain produced. By the 17th of July, McCarthy had given up and was on his way out of town. The residents of Queenstown in Tasmania were very thankful though. In their town, 9 inches (23 cm) of rain had fallen in one week and they were convinced it was because Dr. McCarthy was fiddling with the atmosphere.

Broken Hill struggled on. Special trains brought water into the parched township. The local race meeting was held but the out of town patrons were faced with the knowledge that no washing of bodies or bathing was allowed while in the district. The pubs served whiskey but you had to drink it straight. The mines were facing closure and the locals kept leaving for greener pastures.

And then came the rain. Wonderful, glorious rain. On the 27th of August a quarter inch (6mm) fell in the town and the locals were rejoicing. The Australia wide Council of Churches took responsibility for the raindrops, claiming that Sunday the 16th of August had been proclaimed a day of prayer for rain across the parched country. Dr. McCarthy objected and claimed that it was simply a delayed reaction (6 weeks) to his rainmaking procedures. Regardless of why it was there, the region was rejoicing and the parched earth was coming alive.

And then tragedy struck. In an area with absolutely no place to float a boat, a man drowned in a boating accident. It seems that a pit at the local brickworks had filled with water. Some young fellows crafted a rough vessel out of galvanised iron and timber and took their craft to the water. Unfortunately, these were local young men and were unable to swim. Surprisingly the boat floated long enough to get them to the middle of the small expanse before capsizing and drowning one of the young men. And that is how Broken Hill suffered it’s first ever boating fatality.