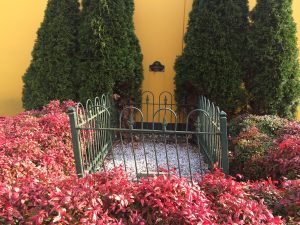 If you’re in Traralgon, Victoria, wander into the Repco carpark on Princes street and there you will find a little grave hidden amongst the cars and bitumen. This little grave is all that remains of the original Traralgon cemetery and the story of the little girl whose remains are interred there is a heart wrenching story about the hardships of colonial life.

Traralgon in the 1860’s was a very small place. Much of the native population had been decimated by smallpox and there were only eight white men living in the area presumably with their families.  The railway was yet to open and the “town” was simply a stopping place on the road to the Walhalla, Jordan and Omeo gold fields. Into this small community came Mounted Police Trooper William Sydney O’Brien Smyth. His district ran from Dargo to the coast and from Rosedale to Shady Creek (Warragul).

Although I have had trouble researching William, I am reasonably convinced that he came from Dublin and that his family was related to the Geoghegan family (a well respected and landed family). He also appears to have been a half brother or cousin to Frederick Leopold Smyth MLA who in 1866, 1868 and 1877 was the representative for the North Gippsland District.

William joined the police force in 1853 when the gold rush was at fever pitch. By 1859 he had left it to pursue a career as a publican in Castlemaine and later as an engineer in Richmond. In 1859 he married Mary Sharry and in 1860 she gave birth to little Thomas Sydney. Thomas died in 1860, but shortly after she gave birth to another son whom they named William. Then came Sarah Catherine, Helena Maria and Mary Ann. One by one each of the children died until early 1863 when the only child still living was Mary Ann. William, Mary and little Mary Anne moved to Traralgon and into the small police station and residence on Franklin street. Within the year, little Mary Ann went the way of her brothers and sisters and William and Mary were once again distraught by their loss

The Smyths buried Mary Anne in the original Traralgon Cemetery which stood in the vicinity of the railway station. In 1877 when the railway was being built many of the graves were moved to the new cemetery on the Tyers road but William was given permission to leave the body of Mary Ann where she lay. William built a white picket fence around the grave and there she remained, hidden away in a railway paddock.

In 1871 William resigned from the police force to travel to the Fijian Islands, but by 1872 he was back and stationed at Malmsbury. William and Mary continued to have children. In 1868 Mary gave birth to Emily Mary and in 1870 to Helena Ada Kate (1). In 1872 Helena Ada Kate (2) was born, in 1874 Lucy Maude, then in 1877 Thomas Sydney William and finally in 1878, Oresty Leopold was born. One by one each of these children died, all but Helena Ada Kate (2) and Emily Mary, who both lived beyond the age of 70.

The death of young children was not an unusual event in colonial Victoria. In the mid to late 1800’s the population of Victoria had boomed but housing and sanitary conditions were yet to catch up. Victoria was suffering from epidemics of smallpox, typhoid, measles, influenza and scarlet fever. Young children and the native population had no immunity to these diseases and so were the most susceptible. Many families lost children but the Smyth’s losses were greater than most. I found that the Smythes registered 11 live births and only two of those children made it to maturity.

For many years William returned to Traralgon to visit the grave of little Mary Ann. When William passed away the grave fell into disrepair. In 1914 a local man by the name of William Mason generously donated the funds to restore the grave and the local railway staff donated their time. It is thanks to these people and to many others that the story of little Mary Ann and the hardships of colonial life are so made so graphically clear in the form of a tiny grave tucked away in the centre of Traralgon.