The Unluckiest and Unloved Settlers 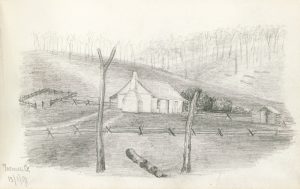 A settlers house on the Toomuc Creek. The house and outbuilding fit the description of the Mt. Pleasant property when auctioned in the 1880- 1890 period. Drawing by L.L. Vale 1891. SSV Collection.

In the 1850’s the area we know of as Pakenham was often referred to as Mintons Creek after two rather unlucky brothers who settled the area. It was only because of some dreadful luck and I’m guessing because the younger brother was a miserable creature that their neighbours decided not to honour Mr. Christopher Minton in perpetuity. Rather a good decision if you ask me.

Lieutenant Christopher Minton was 21 years old when he first arrived in the colonies in 1834. Both Christopher and his older brother Thomas were born in Ireland and were officers in His Majesties 6th Regiment. This was during a time when officers purchased their commissions and so it is probable that they were somewhat wealthy and came from a family of independent means. Thomas had quite a different temperament to Christopher, he was well respected and had become a captain with the same regiment. 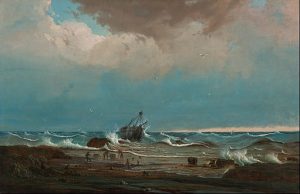 The wreck of the prison ship George III by Knud Bull.

In 1835, Christopher and Thomas were officers on board the ill fated prison ship George 3rd which was travelling between Woolwich and Tasmania. The ship was carrying 220 prisoners, plus guards, officer’s wives and their children. The ship was cursed from the beginning of the voyage. It caught fire and nearly blew up but for the courageous actions of two prisoners who dragged out the powder kegs. During the fire a large percentage of the ship’s food and provisions were lost and as a result, those on board were suffering from malnutrition and scurvy to the point where 12 had died and many more were seriously ill. At the very end of their nightmare journey the captain tried to take a shortcut to quicken the trip near the southern tip of Tasmania and he entered the D’Entrecasteaux Channel. The ship hit unchartered rocks and capsized. The captain ordered the prisoners be kept below as the women and children were loaded into boats. The prisoners rushed the barriers and the guards opened fire on the prisoners. Christopher was involved in orders to shoot the prisoners. Although he was not convicted of any charges, a total of 133 people died, most of them prisoners.

Christopher and Thomas returned to the UK but arrived back in Australia during the 1839-1840 period. This time Thomas brought their sister Jane. Six months later, Thomas was granted a grazing license of 1045 acres at a cost of £1619 to “depasuture stock beyond the limits of locations of the Western Port and Portland Bay Districts”. The license was later called Mount Pleasant and on maps it is shown to be along the Toomuc Creek (then called Minton’s Creek). It took up most of the present day Pakenham, Pakenham Upper and Toomuc Valley area. Opposite Lakeside and behind Bunnings is a small hill where the original Mt. Pleasant yards and huts stood. 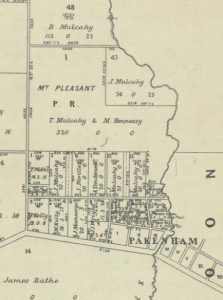 Pakenham map from the 1870’s showing a much smaller Mt. Pleasant cattle run, the Princes Highway and the Toomuc Creek. Lakeside is at the bottom left. PROV image.

One year later it was reported in the Launceston Advertiser that “A melancholy accident occurred to Captain (Thomas) Minton, a few days since, at his station in the vicinity of Western Port. The gallant Captain was superintending the falling of a tree, and having incautiously remained too long within reach of the falling trunk he was struck on the neck and the small of the back by one of the branches as he was attempting to retreat.”  Thomas died within a few days.

Thomas’s will is complicated. He left a will in London but for some reason this is over ridden. His sister Jane is his executrix, but she originally gave up the job and then changed her mind. Thomas left a sum of £600, the grazing lease, some land in the Geelong area and cattle and horses. By 1843, both Jane and her brother Christopher were joint executors and Christopher took up the lease. They remained at Mt. Pleasant although not without controversy.

Despite having £600 from his brothers estate, Christopher neglected to pay the doctors who attended Thomas in his final hours. Within two years of Thomas’s death  Christopher was broke and applied to the courts for insolvency. Insolvency was not unusual but it tended to cause ill-will in a small community. In 1845 he was again before the courts. Prior to becoming bankrupt he had hired a young boy to help with the cattle. During the insolvency case he stated that the boy was employed by his sister. When he hadn’t paid the boy’s wages the boy and his family went to the police. Christopher then changed his story and said that the boy was employed by him but to work on Jane’s Mt. Ararat run. Jane seems to have distanced herself from Christopher at this point. She had purchased and moved to an adjoining cattle run quite a feat for a young woman all on her own. A judge decided that Christopher had committed perjury but being part of the squattocracy, a court did not continue to prosecute him. I imagine he not only alienated his neighbours but also his sister Jane.

Jane seems to disappear around this time. It must have been terribly hard for her. With her older brother Thomas dead and Christopher using her to shift the blame in the court case, going back home to the old country would be an obvious course of action. Although she does not show up on any official shipping records there is one mention in a newspaper of a Miss Minton travelling to London on the Royal George in April of 1846. I can find no further conclusive proof of what happened to poor old Jane. I can’t come up with a marriage or death that fits her except for one sad entry of a Miss Minton born in Ireland who died a pauper and an imbecile in 1880 in Wales.

Back to our miserable Mr. Christopher and the controversy on the Mt. Pleasant run continued when a year later, in 1847, a man named William Maxwell was arrested for cattle stealing. William was running cattle on the station when he was arrested and sent for trial. There is no mention of whether Christopher knew about the stolen cattle.

A few months later on Tuesday the 16th of November in 1847, it was reported in the newspaper that Christopher Minton was dead. It seems that while yoking up some oxen, he grazed his finger. This incredibly slight wound became infected and he died of the injury. Although he probably would have survived, the fact that he had not paid the physician who attended his brother five years earlier made it more difficult to obtain one. Despite the local ill will in the medical and local community towards Christopher, Dr. Bathe, a neighbour finally attended along with a Melbourne doctor but the injury was too far advanced and he refused amputation. Christopher’s death took days and would have been a terribly slow and painful affair. His death was so controversial that some anonymous neighbours took out an ad in the newspaper to say that they did too call a doctor to Christopher but none were available.

This was well before there was any gazetted cemetery or burial ground in the area so I believe that we can safely surmise that both the Minton brothers are buried next to each other on the Mt. Pleasant property. My guess is that their burial marked the beginning of the Pakenham Cemetery and they are the earliest unmarked graves. This makes sense as the cemetery land is in very close proximity to the old Mt. Pleasant huts and yards. In 1944 a terrible bushfire tore through the Pakenham Cemetery reducing most of the early timber grave markers to ash so we will never know for sure who lies in many of the graves on that windswept hill. 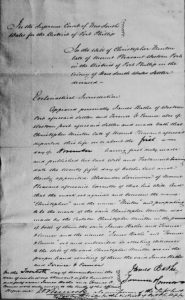 A page from the will of Christopher Minton notarised by his neighbours James Bathe and Terrance O’Connor. PROV image.

In Christopher’s will he left all of his money and possessions to nearby station holders, the Larimour family (after which Larimour road is named). At the time of his death, Alexander Larimour was living with Christopher on the Mt. Pleasant Run. The Larimour family took over the lease of Mt. Pleasant for a very short while before taking up a lease at Diamond Creek. I don’t think being friends of Christopher’s would have done them any favours and they probably wouldn’t have wanted to stick around. The bulk of Christopher’s property was left to Alexander Larimour yet within a two years he was also declared insolvent leaving debts in the Diamond Creek area.

Although I have never found reference to a marriage for Thomas or his having any children, I did find an odd article written in 1871 about a man who claimed that his father was the late Captain Minton from Melbourne. He was found on an island near Papua New Guinea after being shipwrecked there months earlier. Immediately after his rescue, he and his rescuers visited a nearby island and had trouble with the natives. Mr. Minton stayed on shore so that the crew and the rest of the boat could escape. It was believed that he died at the hands of the natives. It was a rather more daring death than that of a cut finger.

NOTES: Minton’s Creek. There is a map published in The Good Country by Neil Gunson published in 1968, which shows Mintons Creek as being directly north of Toomah (on Mintons or Toomuc Creek) and next to Mt. Ararat Station. I am of the opinion that during the Minton brothers reign the Toomah run did not exist and the Minton lease incorporated all of the Toomah holding as well. I believe that during the very early days of the Westernport settlement, all of the land in the area including the area north of the present highway and around the Toomuc Creek was selected by the Mintons. Boundaries changed quite regularly and with each time that the leases came up those boundaries tended to change.  The difficulties of deciding on a station’s actual outline were compounded by the fact that the area was wild, not necessarily surveyed and geographical features such as stands of trees could be used as defining markers. I also know that very early on Thomas called his lease Boran Boron and Christopher changed the name to Mt. Pleasant. It was later that the area was subdivided down and locals referred to the leases as Toomah, Bourkes Run, and Mintons Creek while Mt. Pleasant remained as the area to the east of the Toomuc Creek.

Jane Minton. In the book, Pastoral Pioneers of Port Phillip by R.V. Bills and A. S. Kenyon, written in 1932, Jane is identified as Thomas’s wife. Although I am unable to document their family history, early newspaper reports identify Thomas as travelling with a Miss Minton making impossible for her to be his wife. The fact that Thomas names Jane as his executrix in the London Will shows a close family connection and makes it logical to assume that Jane is his sister. Christopher also identifies Jane as his sister in a court case regarding non payment of wages to a young boy.