Beyond Pakenham in the direction of Warragul lies Tynong. The township straddles the railway line and sits where the “Great Koo Wee Rup Swamp” meets the base of the Gembrook Ranges. The original settlers were farmers who purchased crown land in the 1870’s and the timber cutters and mills.  The railway opened in 1877 but it seems that a station at Tynong wasn’t built until sometime after 1881. There are numerous articles regarding the residents of Tynong meeting with the Commissioner of Railways in an effort to get a siding constructed.

The first mention I can find of Tynong in old newspapers is dated 26th of October, 1876 when a farm of 283 acres (114 hectares) was being sold. Obviously the farmer had difficulty in selling as the farm was advertised on numerous occasions until the 11th of December when it is put up for auction at the “Dandenong Market-Yards”. 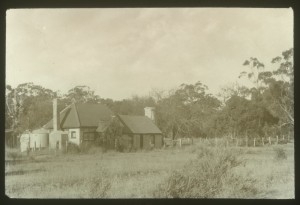 This homestead was on the Old Gippsland road near Tynong. Photo taken in 1927 and courtesy of The State Library of Victoria.

In 1882 there is mention in the Mercury and Weekly Courier that a post office had been opened at the Tynong Railway Station. There are numerous articles about maitenance of the roads, problems at the railway station, including one complaint about the lack of refreshments at the Tynong station. In 1884 there is mention of an annual horse race being held in Mr. Pharoah’s paddock and  that a licence for a hotel in Tynong was refused. In 1903 a store opened amidst much jubilation. In the 1930’s granite from Tynong north was mined to build the Shrine of Remembrance in Melbourne and by the 1940’s the area was getting a name for dog coursing (racing after a lure) on a track to the north of the township.

The Weatherhead family feature prominently in the history of Tynong and Tynong North, but so do names such as Gillespie, Scholes, Synot, Lamb, Cousins and Thomas.  The timber mills in Tynong North were the major industry for the area but the reclaimed swamp ground to the south, made dairying a profitable venture.  Today, Tynong is known for it’s beautiful scenery and attractions such as Gumbuya Park, Mill Valley Ranch and Pepermint Ridge Education Centre attract thousands of visitors each year as does the state park with it’s campgrounds, bush tracks and beautiful picnic areas.