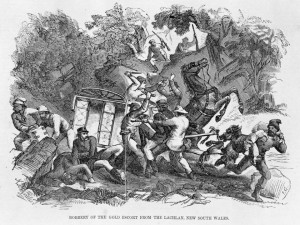 Drawing is of a similar robbery at Lachlan, N.S.W. and courtesy of of State Library of Victoria.

In 1853 a band of bushrangers including a fellow named George Melville held up a private gold escort near Kyneton. The robbery was one of the largest ever known and netted the thieves a cool £10,000 in gold and cash. Just as the thieves tried to exit the colony on board a number of different vessels they were arrested and went to trial in Melbourne. George Melville was convicted and hung for his part in the crime but what happened next is certainly odd and changed the way criminal’s bodies were handled from then on. Melville’s wife and friends applied to have his body released to them and their wish was granted. They took his body, decorated it with flowers and ribbons an displayed it in the window of an oyster shop in Little Bourke Street. Whether they did it because they were upset about his death or as the popular newspapers reported, because they used it to increase custom at the oyster shop, we will never know. After the “Melville incident” all convicted criminal’s bodies were buried in unmarked graves within the prison grounds.