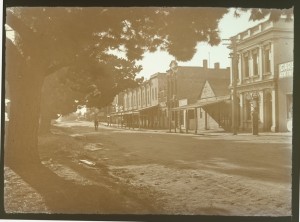 Morwell 1927.
Photo courtesy of the State Library of Victoria.

This article appeared the Traralgon Record on Friday the 6th of November, 1885.

Morwell has a ghost! Unlike all other genus of this description, the Morwell ghost is of a copper coloured hue, and is dressed in sombre black. It first made its appearance to a lady who was in the act of taking clothes off the line. Turning suddenly round, she beheld the object close to her side, and at once fled for protection. Telling her husbapd what she had seen, he at once made a reconnoitre, and after a long search discovered an object moving along a fence, but it was gone when he came up to the fence. Shortly after this the ghost knocked at the door, and on its being opened by the occupant, the ghost fled precipitately. On several occasions since it has been seen wandering to and fro, but all attempts to capture it have been proved futile. Watching parties have been organised, and eyery corner is carefully guarded, but as yet there is no result. Back and front doors are mysteriously opened and shut, windows are rattled, and beds are shaken, but the cause of it is unknown Even our local guardian of the peace has been unable to find any clue to the astonishing freaks of this visible yet invisible spectre. It has been suggested that some person has been playing a practical joke, but this we can hardly credit. Perhaps the present week will disclose further mysteries or else the timid will be afraid to leave their doors.