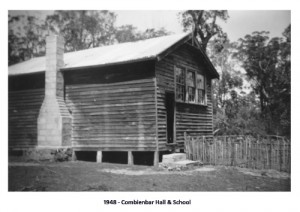 It was during the Great Depression that a young lad by the name of Noel Stagg was prospecting in an area called Combienbar in far east Gippsland. Noel’s family were settlers in Combienbar, a tiny settlement about 80 miles north-east of Orbost. Noel wasn’t having much luck, but he stuck at it, camping in the cold, wet ranges at night and fossicking during the day. Then one morning, a tiny black kitten came wandering into his camp. He had no idea how a kitten had appeared in such a remote location but he scooped it up and warmed it next to his body. He fed it using a teaspoon and so Teaspoon it was named. Noel packed up camp, took Teaspoon home to his mum and declared that the kitten would bring him luck. And luck it did bring.

Shortly after the kitten appeared, Noel found fine gold in the Errinundra stream but was unable to locate a source, so he enlisted the help of Conrad Olsen, an experienced prospector. Conrad had been a successful miner in Western Australia and travelled the country with his belongings in a wheelbarrow. With Conrad’s help they identified a hill with a rich reef nearby. The two men took out ore and the first crushing brought in £720. The mine was called the Baby Endeavor and it was located about 80 miles from Orbost, in an area just north of Combienbar. 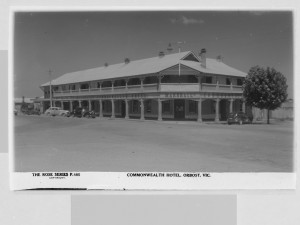 The Commonwealth Hotel In Orbost, 1940’s. Photo from the Rose Series, courtesy of The State Library of Victoria.

Within a few weeks Olsen decided he wanted out, so Noel, with his brothers, bought his share for £800. With the money, Conrad “relaxed for some considerable time at the Commonwealth Hotel, Orbost”.  From Orbost he went to Northern Queensland and then to South Australia. In 1939, Conrad’s body was found on the track between Tennant Creek and Alice Springs. It seems he ran out of water, a deadly mistake and he paid the ultimate price.

Meanwhile The Stagg brothers continued mining and a deep shaft was sunk. By September of 1932, the total yield of gold was £1750 but by then the brothers had brought in another partner by the name of Thomas Parkinson. In June of 1933, it was announced that the Mount Kaindi Gold Ridges Co. PNG,  had purchased the mine and was preparing to employ 100 miners.

In 1937 Noel married Ellen Grace Connley and in 1939 they had a son. In an interesting twist, Noel went to Papua New Guinea. From the 1930’s until the 1960’s he is mentioned as being an alluvial gold fossicker on the divide overlooking the Markham Valley, PNG. Ellen passed away in 1946 and their son, aged 21, died in 1960. Noel returned to Australia and died in 1990.