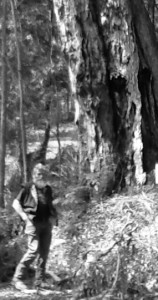 Dangerous looking local (my husband) at The Post Office Tree, Beenak. Photo from the Collection of Annie O’Riley.

The following article was published in The Northern Star (Lismore NSW) on Saturday 25th August 1900.

“A lad named Bert Barnett, while looking for cattle at Gembrook (Vic) was struck on the head by a falling limb, and rendered insensible. After 24 hours, during which time snow fell heavily, he was found on the ground, with a little dog lying on his breast, and the warmth of its body, it is believed saved his life.”

Bert was only 11 years old when he was sent out to work for a Mr. Dennis, a farmer at Beenak. He was fortunate that the man who found him, concussed and lying in the snow, was Mr. Lennox who was familiar with first aid and was credited with saving young Bert’s life. The Lennox family lived on land which today forms part of Gilwell Park and it was probably there that Bert had his accident. Newspaper reports a week after the incident stated that Bert was progressing slowly and it is obvious from these that he had been very close to death.

Bertram Barnett* was the eldest of 8 children. Life was difficult for the family, his father worked first as a labourer and later as a farmer but they did not stay in one place for very long. When young Bertram was born, the family lived in Richmond, within a few years they moved to Foster, then Koo Wee Rup, Longwarry and finally settled down for a number of years in Bunyip before moving on to Korumburra and then Wonthaggi. 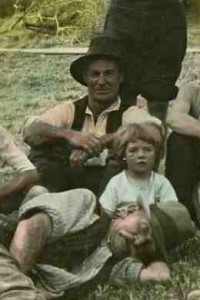 In 1913 when Bert was 24 years old, he met and married Annie Ethel Casbolt. By 1914, both he and his father were working for the State Coal mine in Wonthaggi. The mine had opened five years earlier in response to a strike in NSW that had cut black coal supplies around the Country. For the first time, the family had steady incomes and were able to obtain quarter acre allotments of crown land through a grant scheme, provided they built houses on the allotments. 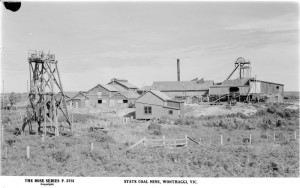 The Wonthaggi State Coal Mine. Image from the Rose Series, courtesy of The State Library of Victoria.

Between 1913 and 1926, Bertram and Annie had five children. Originally they built a cottage in Graham street just around the corner from his parents in Cameron street but by 1931 they were living in Turner street and his parents had moved to San Remo.

In 1932 when Bertram was 47 years old, disaster struck again and this time he wasn’t so lucky. Bert and two other men were working about a mile underground when a group of skips used to cart coal, broke loose and careered down the shaft towards them. One man was able to jump clear but Herbert Hatton was seriously injured and Bert was slammed against the side of the shaft and killed. 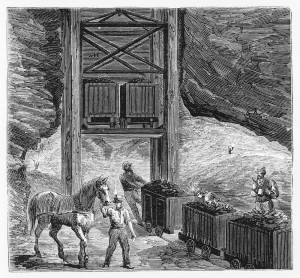 Coal skips at the Australian Agricultural Companies Mine, Newcastle NSW. Engraving by Samuel Calvert. Image courtesy of the State Library of Victoria.

In the 1930’s the world was in the grips of the great depression. There was no workcover or worksafe. If a miner was killed on the job, there was no backup for his wife and family. Annie and the children had to fend for themselves at a time when the whole country was struggling to make ends meet. By 1936 Annie had moved in with her daughter and husband in Dalgety street, Oakleigh. Eventually she remarried and lived another 30 years before passing away in 1965 and was buried at the Springvale Botanical Cemetery. 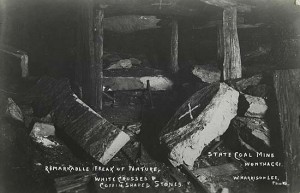 In 1921, two miners were killed when these coffin shaped stones fell from the roof of the Wonthaggi mine. Image courtesy of Museum Victoria.

Working in the coal mines was a dangerous business and Bert’s life wasn’t easy but like many Australians he made the best of what he had. Miners faced danger and death every day. The lucky ones survived and then sometimes they became ill many years after they finished work. The Wonthaggi mine was considered one of the most dangerous of the Australian mines. In 1913 Herbert Patten was killed by “bad air” and in 1921 two miners lost their lives in a fall of stone. Ironically the stones that fell on them were shaped like coffins. 15 months prior to Bert’s death an underground explosion killed 4 men. Five years after Bert died, 13 men lost their lives in yet another underground explosion. And in 1941 a mine manager lost his life. Bert’s death did very little to increase the safety of our mine workers and very little is written about Bert and miners like him.  The coal that was mined at Wonthaggi, Korumburra, Powlet River and Yallourn was essential to the development of Victoria. It powered our trains, our industry and our power supplies. Miners like Bert gave their lives to an industry that built Victoria and we should all be thankful to these brave men.

* Note: I believe Bert and Bertram are one and the same although I cannot come up with indisputable evidence to prove this. The age of Bertram, the fact that his family lived in the area and the lack of other boys with the same name in the vicinity have led me to this conclusion. I have also traced all other men with the name of Bert/Bertram/Albert or Herbert Barnett. This Bertram is the only individual who presence in 1900 is not documented thereby leaving me with the conclusion that he is the same individual.