The Payne Family and Maritimo 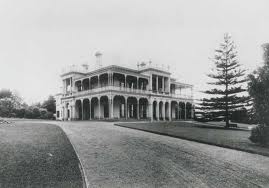 Fred’s father was Thomas Budds Payne who, in 1839, landed in the new settlement of Melbourne. Thomas was descended from a family that possessed large farms in England and Ireland. It seems that much of the fortune was gone by the time Thomas arrived in Australia because he took on odd jobs including shepherding sheep and working on farms. In his letters home to his family he described the opportunities here and in 1841 his parents and siblings joined him. He was the first conveyancer in Melbourne and in 1868, was appointed a magistrate. With his brothers and father he purchased land in inner city Melbourne and farms nearby. By 1856 he had built a magnificent house in South Yarra and called it Maritimo.

Maritimo was not just any house. It stood atop a gentle hill on nine acres and was built in the neoclassical style. Although there does not appear to be any photos left of the house it was described as a grand residence and it rivaled Como and Toorak house in style and design. Thomas Budds filled it with artworks from Europe, beautiful antiques and stained glass windows.

During his life, Thomas Budds was generous with his wealth. Today, if you drive down Toorak road to Punt road you will see Christ Church on the south-west corner. In 1884, Thomas’s daughter Rosa died at age 20 and in 1885, Thomas donated £2000 to Christ Church to build the beautiful steeple on the building. When Thomas died in 1898 his massive estate was valued at over one million pounds. He left legacies to all of his children and was generous to many charities. At the time of his death it was stated that probate duty on his estate was the largest ever received in Australia and today he is ranked as the 22nd all time richest Australian.

But back to 1928 and to Thomas’s son Fred. As the eldest son he received the mansion Maritimo when his father died. His brothers purchased two similarly beautiful mansions nearby, Scottsburn and Leura. It was after his father had died, that Fred married a widow in Westminster by the name of Mary (or May) Elizabeth Lindsay Cooper (nee Church). Mary was the perfect society wife, she held parties and soirees, she was on fundraising committees and her name was constantly in the newspapers. Unfortunatly she did not bear any children and the family had few descendants.

Fred passed away at age 66 at Maritimo after a short illness. His death was reported along with the news that he had donated £33,000 to the Children’s hospital in the name of his sister who had also passed away.

One month later, in March of 1928 the particulars of his will came out. He had dictated that his beautiful mansion was to be demolished and the property sold up. Although his will was written just two years before his death, he made provisions for his children of which he had none. To his wife he gave £3,000, the same amount that he left to his gardener (although his wife was also given a yearly entitlement). To two of his friends he left £5,000 each and he made provisions for his employees as well. His brothers benefitted from the bulk of his estate but to his sister he left nothing explaining that she was “well provided for”.

His wife went on to lead an even fuller social life. Although she didn’t seem to have a permanent address, she was a regular guest at Admiralty House in Sydney and at Government House in Canberra. She counted amongst her personal friends the Earl of Gowrie (Alexander Gore Hore-Ruthven) and his wife. She knew Lord and Lady Casey and in 1933 she entertained the Prince of Wales (Edward the VIII). After the loss of her house she went on to entertain in upmarket hotels and private clubs and she was regarded as a legendary hostess with a lively wit and a love of beauty.